In keeping with the popular hashtag theme #ThrowbackThursday, or #tbt, we’re republishing a blog post from May 20, 2010. Author Ted Inkley still serves on our board and continues to ponder on things related to bicycling. 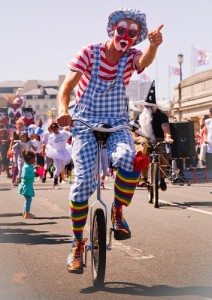 How many times have you heard this buzz-phrase? Bike enthusiasts and advocates talk about it. They all seem to want it. Alternative transportation advocates in New York City even considered the topic important enough to merit a “Bike Culture Summit” earlier this month.

But what is bike culture, anyway? Does it mean anything, or is it just one of those terms-of-the-moment that sound good rolling off the tongue, like “paradigm shift” or “synergy”?

A Google search on this much-used phrase returns 4,040,000 hits (more or less), with links to websites featuring everything from World Naked Bike Ride Day to bicycle-operated water pumps to a bicycle dance team. Does this bring us any closer to a definition? I don’t think so.

But if you cruise through North American-based bicycling websites, you do get the idea that when people talk about “bike culture,” what they’re really referring to is the subcultures of bicycling that exist here—that amalgam of groups, from fixie fanatics to weekend warriors to hard-core commuters, that makes up the bicycling scene on this side of the Atlantic.

Contrast this kind of self-conscious group identification with North America’s car culture. When most Americans get in their cars to go to work, they don’t consider themselves to be part of a cultural phenomenon. And when they drive to the supermarket, they’re just going to the store. That’s because car culture is so mainstream that it isn’t a separate culture at all—it’s an inherent part of American culture. We built the infrastructure for motor vehicles, and the rest came naturally.

That’s the way it is with cycling in countries where two-wheeled transport is considered mainstream. Take Denmark, for example. If you go to a dinner party in Copenhagen, chances are good that every guest will have arrived on a bicycle. And if you marvel at this phenomenon, the Danes will be amused and a bit puzzled. It’s just how they get around. And the reason they do is thanks in no small part to official transportation policy and infrastructure that favor the bike over the motor vehicle.

So maybe we North Americans should be less concerned about bike culture and more concerned about just making cycling a safe, convenient and comfortable option for transportation and recreation. And not just for road warriors and cycling enthusiasts, but for everyone. Then the bike culture will take care of itself.

This article was posted in Bike Culture, Infrastructure, Safety. Bookmark the permalink. Follow comments with the RSS feed for this post. Both comments and trackbacks are closed.