When I started riding my bike to work I did so only on the days that I deemed “perfect” for bike commuting. Back then in the long-ago, this meant: 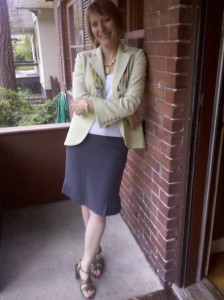 Exercising my bike habit doesn’t mean I have to wear special clothes. This shot is from my commuting days in Spokane.

I lived 3.5 miles from work at the time.

It was all downhill and then a flat bit to get there.

The meetings I went to were most often either in a building 2 blocks from my office, or in another building 1.3-1.5 miles away depending on the route I took — the longer route would involve use of the Centennial Trail along the Spokane River for over a mile.

I lived on a bus line (a specific choice I made buying that house, just as with my choice of neighborhood and house in Seattle now).

I’ll wait while those of you who commute regularly (or who have only known me as a bike commuter) stop laughing.

And then I’ll remind us all that for someone who hasn’t yet formed habits around bike commuting, everything that presented a barrier to me as a beginner is a barrier to someone who’s just getting started today. (And hey, it was uphill on the way home, and my first day of bike commuting the temperature topped 100 degrees. I pushed my bike the last 2 blocks. The barriers are as real as you perceive them to be until you learn new habits.)

I’m much more comfortable now with a wide range of weather conditions than I was back then and I own the few items that add to bicycling (or walking) comfort when you’re creating your own wind chill.

I have what I need to carry stuff on my bike — nothing more complicated than a rack and a bag. As a bonus I’ve realized that using a car allowed me to build up quite the deadweight of things I didn’t really need to carry and I’ve lost some weight.

I realize how much easier it is to get around on a bike than in a car in downtown traffic — something I started to pick up on as soon as I realized that when I biked to a meeting, I was inside and sitting down while others prowled for parking spots close to the door to cut down on all that exhausting walking.

I shifted my clothes shopping habits only slightly, to make sure my skirts let me get on the bike and my pant legs don’t get caught in the chain. Shoes? You can bike in anything. It’s easier to bike in high heels than it is to walk in them.

I got everything in my life lined up to eliminate barriers to biking, which, coincidentally, meant I started to notice barriers to driving that before I had taken for granted.

In short, I developed new habits that make biking, rather than driving, the easy choice.

And while I don’t recommend biking on autopilot (mindlessness: the bane of everyone maneuvering in traffic), with those habits I’ve made it oh so easy to get on my bike without even thinking about how I’m going to get to work. It required a lot more thought when I was choosing between biking and driving. By thought, that is, I mean hassle factor.

On any given day I follow one of two habits: bike to the bus stop, put my bike on the rack, and read all the way to the office, or bike the full 10.5 miles and arrive charged up and fully oxygenated. I reverse it in the evening — again, without having to think about it beyond looking at the One Bus Away app to see when the next bus leaves and choosing between 30 minutes and 60 minutes for the trip home.*

Either way I’ve had a space and time that are just mine before plunging into the whirlwind and I’ll have another space and time on the way home to shift my mental gears, along with exercise for body and mind.

I believe those are the habits the Surgeon General recommends.

*By the way — if you’re really a creature of habit and you really like predictable schedules, I have to tell you that going by bike and/or bus gives me a much more predictable commute than driving. Driving involves too many variables involving other people and the volume of road space consumed by their vehicles. This was just as true when I lived in Spokane as it is now living in Seattle, so it’s not just an urban thing.

This article was posted in Attitudes, Bike Style, Bike to Work, Commuting, Encouragement, Gear/Maintenance, Health, News. Bookmark the permalink. Follow comments with the RSS feed for this post. Both comments and trackbacks are closed.