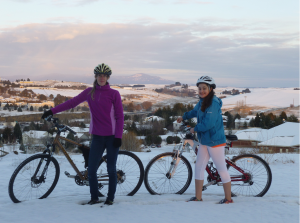 My 11-year-old daughter Isabella and I have been walking, biking, and busing everywhere since she was born in 2002. For the last 5 years, our primary mode of non-motorized transportation, outside of walking, has been our bicycles. Those bikes are taking us places and help shape the individuals we are today and our behavior.

Isabella got her first new bike at age 4. I kept her in safe bicycle riding areas where there was almost zero automobile exposure. After saying goodbye to the training wheels, taking her on biking trails, and getting a couple of years of biking experience under her belt, I began taking her on everyday-type trips, alongside cars.

Many times I teased her and said I was going to put a Chunk flag (from The Goonies) on her bike, but our local bike store, B&L Bikes, reassured her that they wouldn’t sell me the flag for her bike. (They always make sure Isabella’s bike is in safe operating condition and let her know that they have her back when it comes to me teasing her.) Those flags are definitely a great idea for those who are looking for more visibility and I strongly recommend them! Soon, though, she outgrew that bike and the distances she was travelling with me.

Around that time, her dad won a brand new Kona bike that just so happened to fit me, so I staked claim to it. Isabella, however, needed a new bike. One of the most insightful, kindest people I know decided he wanted to buy Isabella a new bike so that she could ride again. With contributions from our extended family and this friend, we were able to buy Isabella a very nice, new Trek bike. Then we were able to outfit her bike, along with my new Kona, with different gadgets to make riding safer and more doable for us.

Being active in our community with various organizations and with Isabella’s sports schedules, we started biking more and more. By the age of 9, Isabella was biking 15 miles round trip to attend swim team practice. When our city’s recreation department held their first National Bike Month competition in 2012, as part of the Let’s Move! Pullman campaign, Isabella was an easy winner, having biked over 185 miles during the month of May. Riding bikes is great physical conditioning for her, but also a time for her and I to talk about the day’s events or anything else we want. Because that 15-mile trip is mostly on a separated bike trail, the Bill Chipman Palouse Trail, we are able to ride in a relaxed environment, while feeling like we are a part of the natural environment.

Over the last 7 years, Isabella has grown so much as a cyclist. Biking as an everyday form of transportation has helped shape her worldview when thinking about the environment, climate change, economics, available time for family and leisure activities, health, pollution and asthma, foreign policy, and how America’s reliance on oil affects other countries and indigenous peoples. (Yes, some of these words and concepts are big for an 11-year-old, but it’s not that hard to take it down to her level.).

I think one of the biggest realizations Isabella has from biking everywhere is the one that connects her to her community. Pullman, Washington has watched Isabella bike everywhere since she was young. She even shows up, via bike, to City Council, School Board, and PTA meetings, to listen and advocate for safe and adequate biking infrastructure (although I have to admit that I once paid her $20 to talk at one of these meetings, because my nerves were getting the best of me).

She is able to connect with individuals, with the perspective and credibility of a child who cycles, simply because she is commuting at the people level and pace that is at the heart of her community. She is able to connect and talk with them in a way that is fundamentally different than if she were being driven in a car everywhere. Her message includes more than one form of active transportation; we have also benefitted from a well-functioning bus system in our town, which has supplemented our biking.

This past summer, I wanted to go on a 40-mile bike ride from Pullman to Troy, Idaho. At 18.9 miles into the ride, Isabella did the math and figured we still had more to go and that we would have to ride back as far as we were riding out. She decided 18.9 miles was good enough and so we turned back.

We rode about 39 miles that day, and I was so proud of her going that distance, but also for being able to say when far enough was far enough. (If I want her to ride across Washington state with me next summer, I have to start conditioning her now.) Soon after, she started middle school and got familiar with riding to and from that new school location.

Read Part 2 of Biking in Pullman with the rest of Isabella’s story and a call to action for Pullman residents who want their school locations chosen to encourage biking and walking.

This article was posted in Advocacy, Education, Family biking, Guest Blogger, Kids, Whitman County. Bookmark the permalink. Follow comments with the RSS feed for this post. Both comments and trackbacks are closed.