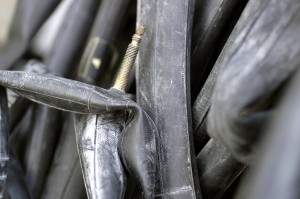 Have you patched your bike tube for the last time? Don’t throw it away—upcycle it!

We use a lot of bike tubes in our country. Last year, 13 million new bicycles (20” wheel and bigger) were sold in the US. That’s 26 million bike tubes for those new bikes. Now add in the older bikes already in use and, well, you get the picture. That’s a lot of tubes heading to the landfill.

Alchemy Goods, a Seattle-based company that creates bags and other accessories out of used bike tubes and other reclaimed materials, wants your used tubes. The company has launched a campaign to collect one million tubes by the end of 2014. So far, they have amassed 400,000 tubes.

Used bike tubes are the key ingredient in Alchemy Goods products and nothing goes to waste. Old tubes are cut and stitched together as bags, wallets and belts. Even an old valve stem is given a new life as a zipper pull!

As the demand for their products have grown, so has Alchemy Goods’ need for old bike tubes. The company has partnered with REI, Trek, and hundreds of independent bike shops to collect used tubes. Just drop off your old tubes at participating bike shops.

You can learn more about Alchemy’s tube upcycling program here.

This article was posted in Bike Culture, Sustainable Living. Bookmark the permalink. Follow comments with the RSS feed for this post. Both comments and trackbacks are closed.