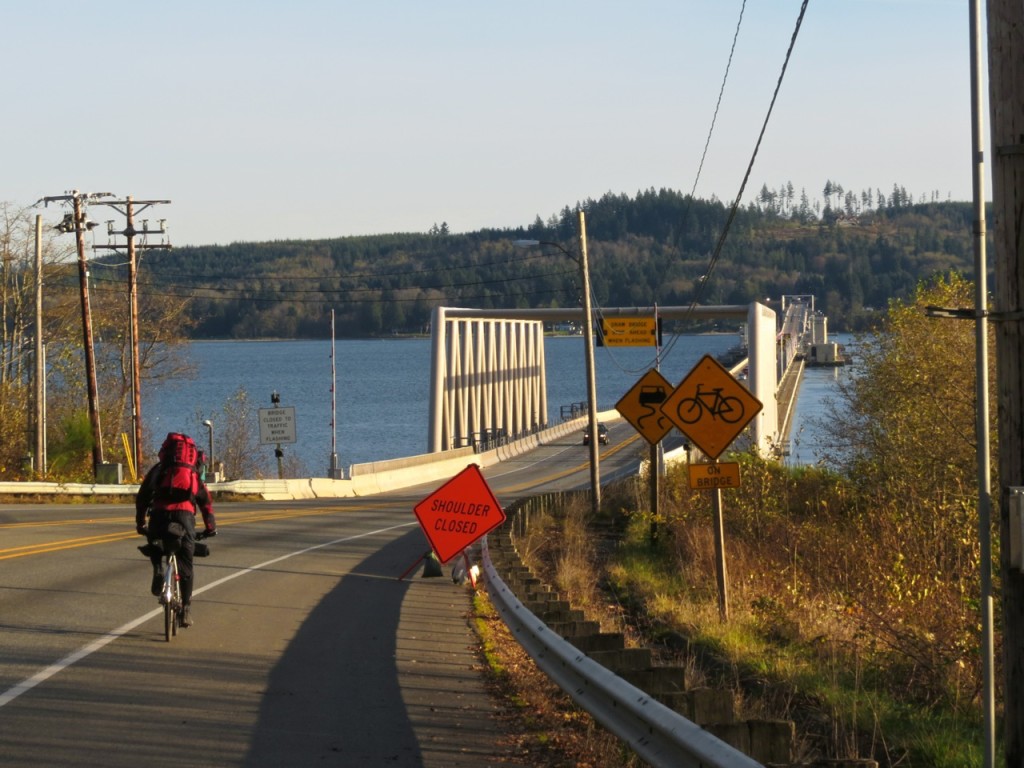 To recap, over $1 million in improvements will be made by filling in bridge grating on the area used by bicycles with elastomeric concrete and by improving bridge plates that cover the floating bridge’s joints. For the recap of the campaign for improvements, see our  press release from the summer.

Washington Bikes has been checking-in with WSDOT on access issues to report out to the larger community.

During the day, the contractor implements lane shifts to create a work area which leaves two 11-foot lanes and a 3’ path for pedestrians and bicyclists…  The 3’ shoulder is on the opposite side of the bridge from the work area.  Signing at each end of the bridge directs bicyclists to the side with the 3’ path and requires them to dismount and walk.

During the night time, the contractor may restrict traffic on alternating, one-way, flagger control movements.  Bicyclists using the shoulder will be stopped at the same place as vehicular traffic and move through the one-way traffic segment simultaneously.  The “night time” duration when this can be in place is approximately 10pm to 6am.

During hours when the contractor is not working there will be times when an area in the shoulder will be coned off and protected.  Most of the time this will be when the elastomeric concrete is curing, but there are other times this will occur as well.  In these instances the shoulder will be reduced to 3’ (from the fog stripe to the delineation cones).

2)      The contractor will be working on two sections at one time (typically).  For example, the current work is on the south side shoulder of the east lift span and the east truss.  Each work segment is approximately 300’ however the traffic control may extend between the two sections making the 3’ shoulder closure to 2500’.  If the 2500’ lane shift is in effect is prevents traffic from moving over, then back, just to move over again (weaving).

3)      If the bicyclist is moving in opposition to traffic then they must walk.  The signing routes them to the side of the bridge with the 3’ shoulder section, however if they inadvertently miss the sign and approach the work are then someone will assist them in getting through the workzone safely.

4)      For night time work, a bicyclist riding east would ride on the shoulder or in the lane in the same direction as traffic.  When all traffic (motorized and non-motorized) is stopped by the flagger at the one way alternating traffic zone, then the bicyclist would stop with traffic and proceed through the one way are along with traffic.  We have also spoke with our contractor and there should be no problem assisting a night time bicyclist in walking or slowly riding inside the delineation (work side of the traffic control).

Thus far we have had no reported or observed issues with non motorized traffic moving through the work areas.  I have seen several cyclists ride the bridge during our work and they flowed well through the work.

Here’s what things looked like out on the bridge in late November. Photos courtesy of Don Willott of the North Kitsap Trails Association. 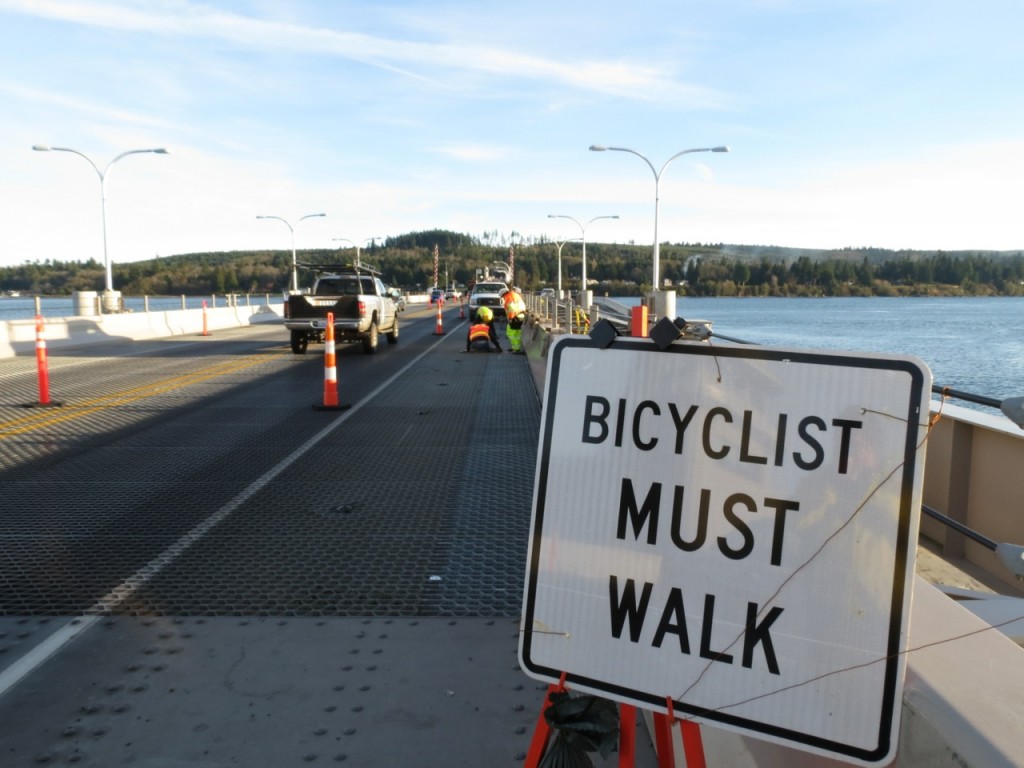 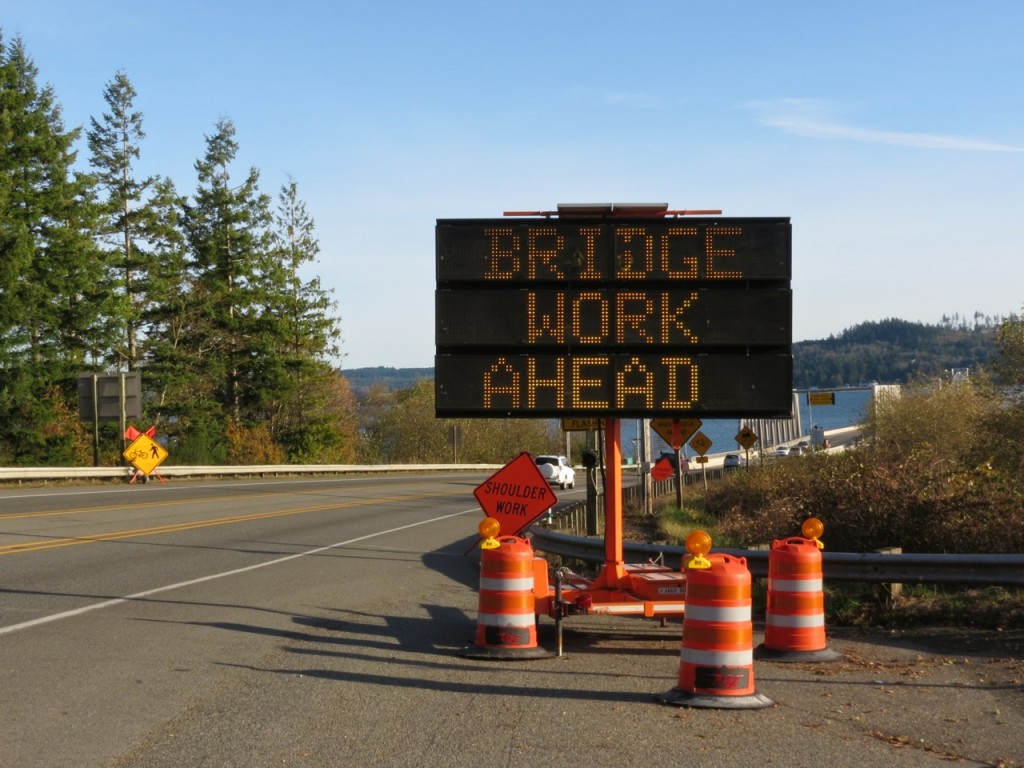 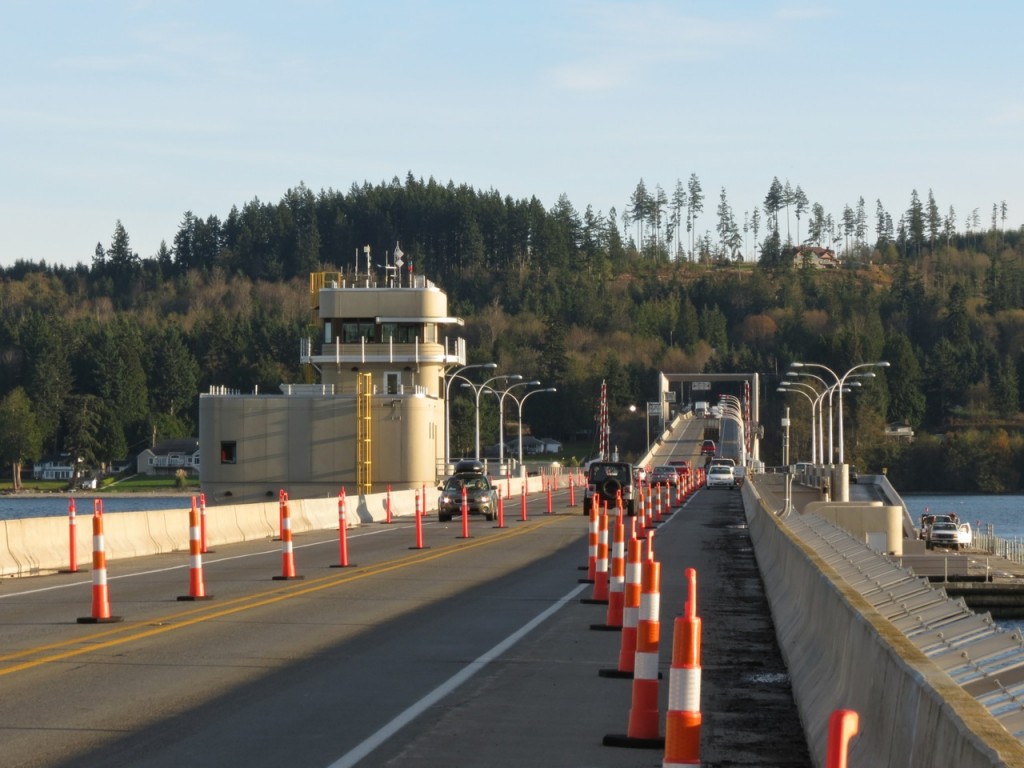 This article was posted in Advocacy, Infrastructure, Issues & Advocacy, Kitsap County, Olympic Peninsula, Safety, Transportation, WSDOT. Bookmark the permalink. Follow comments with the RSS feed for this post. Both comments and trackbacks are closed.