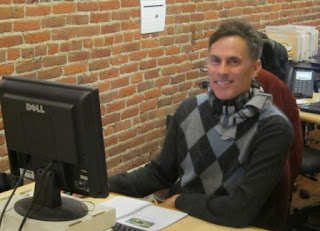 Please join us in welcoming Jack Hilovsky. He has joined Washington Bikes staff as the new Development Manager.

A native of Cleveland, Jack migrated to Seattle in 1986 and has called Washington his home ever since. He graduated from the University of Washington’s Evans School of Public Affairs and managed public health programs for the National Institutes of Health and the UW before turning his attention to community-based groups.

Jack brings a natural talent for building relationships and partnerships, communicating vision and values, and organizing special events. As the Executive Director for the Capitol Hill Chamber of Commerce for three years, he built the organization’s membership from 18 to 200 paid members, finalized and executed the neighborhood’s mitigation plan with Sound Transit, and orchestrated eight working committees focused on topics ranging from marketing and events to retail development.

“I’m delighted to land at the Bicycle Alliance and look forward to meeting members and supporters of this visionary organization,” said Jack. “I look forward to applying my community building skills to inspire greater support and funding for the Alliance.”

Jack arrives to a full plate at the Bicycle Alliance. His assignments include developing a fundraising program, working with the staff and board to grow the membership base, and marketing the Share the Road license plates. He will also play a key role in the organization’s marketing efforts.

Working for the Bicycle Alliance allows Jack to apply his work skills to advance one of his personal passions—bicycling. He loves seeing the world from the seat of a bicycle and the connection biking gives him to his surroundings. Jack celebrated his thirtieth birthday cycling around Ireland, he has bicycled the Pacific Coast, and he is a fair weather bike commuter. Off the bike, Jack also enjoys swimming, running, yoga, memoir writing, and he’s a film and theatre buff.