A Tale of Two Cycles: lust and lasting love 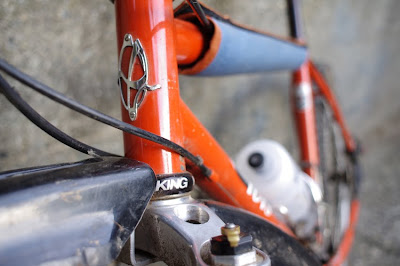 Have you ever gotten bike lust for a bike that you have been riding for years? I have an undisclosed number of bikes, but i ride two of them the most and they are my oldest steeds. I’ve been riding them both for over a decade and they are decidedly familiar. This year i’ve had my most prolific mountain bike season in nearly a decade which has helped me to fall in love with my mountain bike again. 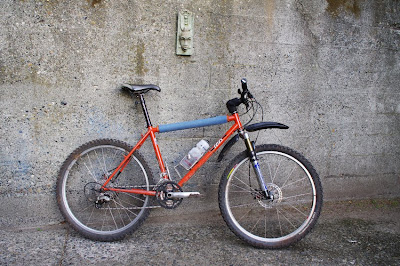 This 1996 Ibis Mojo is a classic steel hardtail built in Sebastapol, CA from custom drawn Tange Prestige tubing. In 2001 i had a disc brake tab and bracing tube silver soldered onto the frame by Martin Tweedy who was then the Ti Cycles steel frame builder. 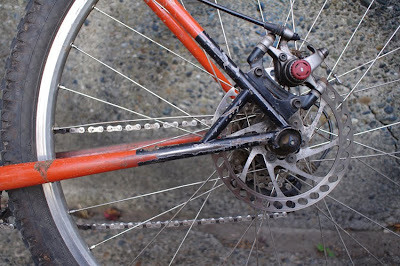 At that time i also updated the parts kit to include Shimano XT drivetrain, Marzocchi Atom 80 coil sprung fork and Hayes disc brakes. As you see in the photo above i am currently running Avid BB7 cable-actuated disc brakes. Of course now it is due in for some new drive train parts, speaking of which…

My daily driver is the other bike to which i have a renewed attachement; it is a 1999 Surly Cross Check. All it took was replacement drivetrain parts, cables, brake pads, handlebar tape and rebuilding the wheels and voile… rebirth. Aside from the years that we’ve spent together, both of these bikes have special personalities. 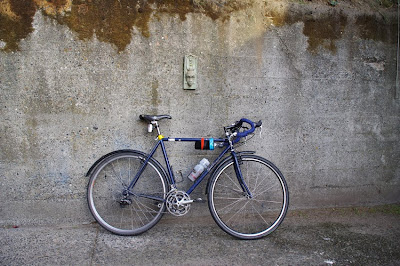 The Ibis and the Surly are quite a pair. They’ve been my two main squeezes for the aughties. While other bikes may come and go, i am quite sure that i will be riding both of these bikes into middle age. The Ibis is one of a kind, even though it began life as a production bike. It was built in 1996, when cantilever brakes were still the norm for mountain bikes, so it has the classic Ibis cantilever brake cable stop as seen below. 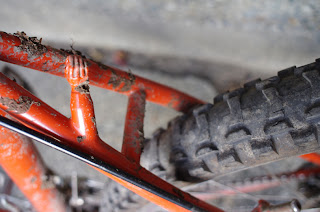 In 1997 linear pull brakes (AKA V style brakes) set a new standard for the industry. With the frame modification the Mojo was assimilated into Northwest mountain biking and happily become a disc brake bike that is a modern classic. Another special feature of the Mojo is that it is equipped with a thumb shifter allowing trimming of the front derailleur that is much better than what you can do with a contemporary trigger shifter (the rear derailleur is cabled up to a trigger shifter).

The surly is far from unique, but it is mighty special. The surly isn’t just special because of our fifty thousand miles together, but i also don’t see any others like it around town. While the Surly Cross Check is a rightfully very popular bike, the first generation bikes are extra cool. The tubing used to build the first generation frames is nicer than that used in later models (sporting Reynolds 631 rather than Surly housebrand 4130 steel tubing) and the steerer is one inch threaded as opposed to the later one and an eighth threadless version (which added half of a pound to the frame and fork). Dark blue paint also hasn’t been used on the Cross Check since the first generation with the exception of the Traveler’s Check. The Surly has a solid mix of Shimano goods including Ultegra, XT and XTR and some other nicer parts like a Ti Cycles titanium seat post. 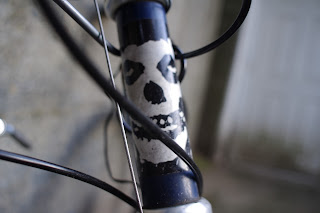 The Misfits icon on the headtube keeps things Surly. In all seriousness though, these bikes are great but the experiences that they’ve enabled me to have are the truly compelling thing about the bikes. These bikes have taken me from everyday commuting and utility rides to world class mountain bike rides like Devil’s Gulch, Suntop and Noble Nob. As much as we might love our bikes let’s remember that the ride is what matters. Any trusty steed, no matter how humble or fancy, deserves reverence, recognition and replacement parts. Enough of this, i’m going riding!

This article was posted in Bike Culture, Commuting, Gear/Maintenance, Transportation. Bookmark the permalink. Follow comments with the RSS feed for this post. Both comments and trackbacks are closed.