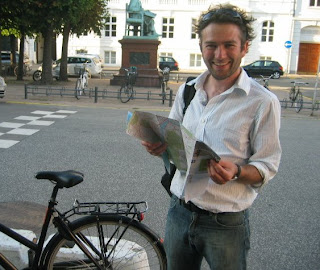 Blake Trask is a self-identified policy wonk who began addressing transportation issues through research in college, has since been civically involved in advising the City of Seattle on bicycling policy and planning, and has worked on transport projects as a consultant.  In August, he will begin applying that knowledge as the Statewide Policy Director for Washington Bikes.

Currently the chair of the Seattle Bicycle Advisory Board, Blake looks forward to turning his transportation focus statewide with his new position.  He is excited to draw upon the knowledge and background of the Bicycle Alliance’s Legislative and Statewide Issues Committee and lobbyist Michael Temple on 2012 priorities.

“I’m especially interested in the 20 mile-per-hour bill (HB 1217) and HB 1700, which relates to the design standards as a complement to Complete Streets and better bicycle/pedestrian design,” said Blake.  “They tie into my interest in broadening the toolboxes of individual municipalities to make safer streets for all roadway users,” he added.

As the father of a 9-month-old daughter, Blake feels even more inspired to promote safe and accessible transportation options for all Washingtonians.  The Bicycle Alliance’s work to implement Safe Routes to School statewide and promote active transportation are priorities for him.  Blake believes there are opportunities to improve urban and rural cycling, and to strengthen the link between cycling and economic development.  He’s excited to be a part of making these opportunities a reality.

Blake holds a master’s degree in environmental policy and planning from the University of Washington.  Prior to joining the Bicycle Alliance, he worked for Triangle Associates where he worked as a facilitator on often contentious planning and policy issues in Washington state and designed and implemented public involvement for large public works projects.  He also served on the leadership team of Streets for All Seattle campaign, which has worked over the past year-and-a-half to seek additional funding for walking, biking and transit.

“Blake is well known in the Seattle area where he has honed his considerable transportation skills as chair of the Bicycle Advisory Board and on various bicycle-related funding campaigns,” said executive director Barbara Culp.  “Besides his transportation acumen, Blake has mediated sensitive environmental issues and knows how to bring all parties to a consensus.  He knows when to be tough and when to be a team player.  He’s a welcome addition to the Bicycle Alliance staff and its vision of a bike-friendly Washington.”

Blake grew up on Vashon Island and has generational roots that stretch into eastern Washington.  He and his family live in Seattle where he rides his bike often for transportation.  When he’s not consumed with parental responsibilities, he enjoys camping around the state and spending time with his friends.

This article was posted in Advocacy, Funding/Policy, Issues & Advocacy, News, People, Politics, Transportation. Bookmark the permalink. Follow comments with the RSS feed for this post. Both comments and trackbacks are closed.