Mare Sullivan, a self-described suburban matron from Kirkland, never had a bicycle as a child.  Her parents offered to buy each of their children a bike for their 10th birthday, but Mare bargained for a guitar of equal value instead.  She finally purchased a Sears Free Spirit 10 speed before heading off to college and rode it a lot during her undergrad and graduate years. 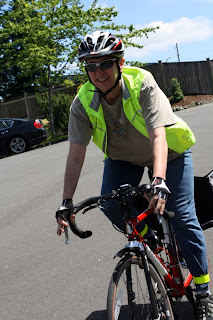 After marriage, Mare embarked on a career that required her to drive all over Western Washington so her biking time was reduced to recreational rides with her eldest daughter.  Her bike eventually was relegated to the garage when her second daughter could/would not learn to ride.

Fast forward a couple of decades to February 2008.  Mare was teaching an Environmental Science course and challenged her students to commit to one lifestyle change that would make a positive impact on the environment.  She joined them in the challenge by taking up bike/bus commuting.

“The first day was terrifying,” Mare recalled.  “The bus driver was kind enough to show me how to put my bike on the bus and I was scared riding in downtown Bellevue.  With intermittent walking breaks, I rode my bike home that afternoon.”

Surprisingly to Mare, her family and friends, by May 2008 she was a fulltime bike commuter and had entered the Group Health Commute Challenge.  She finished in the top 31% of all riders; top 15% of all female riders; top 13% of new bike commuters; and top 6% of all new female commuters!  By the end of the year, she had logged over 2600 miles on her bike.

“I like the pace of biking–stopping to visit or ponder or observe along the way,” explained Mare.  “I like having more energy, being stronger, and 30 pounds lighter than I was three years ago.  I never envisioned myself–an overweight, 50-something matron from the ‘burbs–ending up biking more miles than I drive each year.  Crazy.  And fun!”

Tell us your story!  I Bike is a project of the Bicycle Alliance of Washington to put a personal face on bicycling when we talk to elected officials and the public.  Contact Louise McGrody if you’d like to share your I Bike story with us.

This article was posted in I Bike, People, Seattle. Bookmark the permalink. Follow comments with the RSS feed for this post. Both comments and trackbacks are closed.