Gravity, Bike Lanes and the Limits of Vehicular Cycling

By baw_admin | Published February 1, 2011
Today’s post with accompanying photos was submitted by Mark Davison. Mark has been cycling in Seattle since 1988, both for exercise and for practical transportation. During a 9 year period in the 70’s he was carless and used a bicycle as his primary mode of transportation, which has made him a stalwart defender of cyclists’ rights.
Like any political activity these days, bicycle advocacy appears to be split apart by warring dogmatic points of view.
At one end of the spectrum, the Vehicular Cycling camp holds that “bicyclists fare best when they act, and are treated in return, as drivers of vehicles, with the same rights and responsibilities that motorists have.”  This point of view is worked out in full in the book Effective Cycling by John Forester. The essential idea is that cyclists must be trained to ride in–rather than beside–traffic, and that to avoid collisions at intersections they must learn to choose both the appropriate lane and position within that lane. Safe lane position is obtained by carefully merging into traffic lanes as required. From this point of view, cyclists should never be legally required to remain in bike lanes, as this will prevent the correct lane positioning.
Although Forester’s Effective Cycling curriculum is no longer used by the League of American Bicyclists, similar ideas on lane positioning are included in the LAB Smart Cycling curriculum. An excellent video demonstrating the techniques from the cyclist’s point of view can be found at http://www.youtube.com/watch?v=ZFjCza5e1kw.
A corollary of the Vehicular Cycling point of view is that money spent on separated bicycling facilities is almost certainly money wasted, condemning cyclists to frequent collisions at intersections.
At the other end of the spectrum, the Sheltered Cycling camp holds that normal citizens can only be enticed into cycling if they are provided with separated facilities, which will allow them to overcome their fears (justified or not) of having cars collide with them from behind. Separate facilities can be either bike lanes striped on the pavement, or preferably cycle tracks or cycle paths that are physically separated from the roadway. Collision rates from interference with cars at intersections may be higher than in the vehicular approach, but the sense of security provided by the separated facilities will attract so many new cyclists that the overall rate of collisions will be lower because motorists will become more aware of cyclists. Motorists who comment on the web on cycling issues are often attracted to this theory because it gets cyclists out of the way.
This point of view reaches its purest form in the Copenhagen school, as is discussed in great length at Copenhagenize.com Mikael Colville-Andersen, also advocates for cycling in ordinary clothes without helmets so that prospective cyclists will identify more with cycling as an activity.
The political corollary of the Sheltered Cycling point of view is that all funds for bicycling facilities should be spent on lanes, tracks and paths that separate cyclists from the roadway. Use of sharrows is considered at best evil, at worst an invitation to chaos.
How do these two schools of thought play out in the actual behavior of Seattle cyclists? I don’t have a definitive answer, but one recent, rare and deliciously sunny winter day in downtown Seattle I walked up Pine Street headed east, and watched cyclists interacting with traffic.
What I found is that each point of view fails because it doesn’t allow for the gravity of the situation. 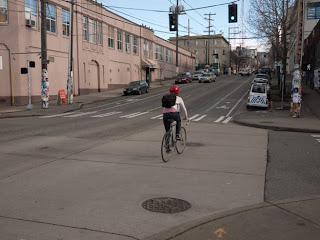 Going uphill, cyclists struggle to overcome the unavoidable retarding force of gravity. Traveling little faster than a walking pace, they seem content (or perhaps resigned) to stay in the bike path even if this puts them in the “door zone” where they might easily collide with an opening car door. Merging into the traffic lane when flowing traffic is present is impossible, given the speed differential.  Left turns are made by crossing the intersection, stopping on the far side and waiting for the light. Left and right hooks are prevented by carefully timing  passage through the intersection, or by dismounting and crossing as a pedestrian. I witnessed one cyclist simply riding up the sidewalk. He had very low gears and was proceeding at a slow walking pace, expertly riding around lamp posts and pedestrians. 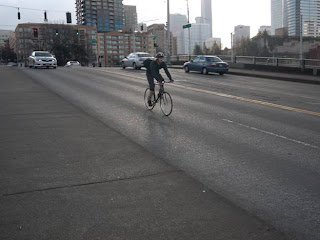 Going downhill, cyclists were liberated by the helping hand of gravity. On many of Seattle’s hills it is easy for a cyclist of no particular athletic strength to maintain 25 or 30 mph. At these speeds it is practically suicidal to remain in a bike lane that is striped too close to the parked cars. You see the cyclists swooping down the hills, claiming the lane, merging left to make left turns, just as the Vehicular Cyclists would have them do. Evidently Seattle cyclists’ fear of being killed or maimed from striking a car door that is opened suddenly in front of them conquers their desire to be protected from the cars, and they are liberated from the Copenhagen conventions.

On level roads I didn’t see any consistent behavior.  When traffic was light cyclists stayed in the middle of the lane, especially when there was another lane in the same direction so cars could get around. 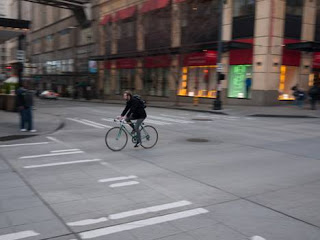 So here’s my summary.  Going uphill, gravity slows down cyclists so much that full vehicular cycling is impossible. Going downhill, the natural speed of a bicycle is high enough that vehicular cycling is possible for almost all cyclists, and will be preferable to either striking an opening car door at high speeds, or creeping along in the bike path at 5 mph, riding your brakes the whole way down. On the level, it depends on how fast the cyclist can go relative to the density and speed of the motorized traffic. My own experience from cycling in Seattle is that most Seattle bike commuters maintain between 15 to 18 mph on the level. This is far too fast to cycle in the door zone, but often too slow for impatient motorists who want to speed from one light to the next so they can spend more time waiting in line. 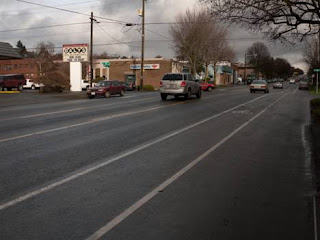 The Seattle Department of Transportation seems to be coming to grips with the immutable force of gravity. In the recent road diet applied to Stone Way, the steep sections have bike lane markings going uphill, and sharrows on the downhill side.
Unfortunately this means that the dogmatic purists can only go one way– the chic ladies on their fat tired Dutch bikes will be grinding up the hill in the bike lane, and the lycra clad vehicular curmudgeons will be flying downhill over the sharrows. 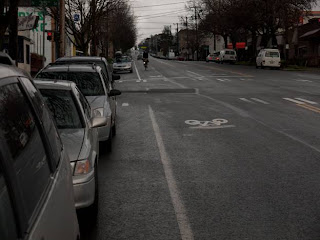 The rest of us will have to operate both ways and free ourselves from the bonds of dogma as we submit to the dictates of gravity.

This article was posted in Advocacy, Attitudes, Bike Culture, Education, Guest Blogger, Infrastructure, Safety, Seattle. Bookmark the permalink. Follow comments with the RSS feed for this post. Both comments and trackbacks are closed.