The worst part is that this bicyclist thought he was doing the safe thing by staying as far from moving vehicles as possible, not even realizing that he risked being clocked by a turning car, an opening car door, or a faster-moving bicyclist who never saw him coming out of the parking lane.

Riding down Market Street toward downtown Kirkland, a bicyclist just ahead and to the right of me unexpectedly turned left without signaling, passing directly across my path of travel. He had assiduously eschewed a left-turn lane, favoring instead the going-straight lane that I had chosen for my straight-through path of travel. After I picked myself up off the ground, the bicyclist explained that his unexpected left turn, executed from the middle-right side of a straight lane, “avoided the bottleneck” created at the intersection where many cars choose to turn left.

The worst part is that the bicyclist thought he was doing the safe thing by staying as far from turning cars as possible, not even realizing that he was breaking the law and endangering himself and others by behaving unpredictably. 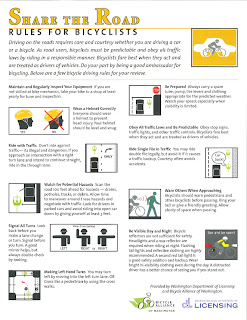 These are just two examples of choices I’ve seen cyclists make in the name of “safety” that actually endanger the bicyclist and, potentially, other road users. The two bicyclists in my vignettes didn’t realize that they needed further bicycling education, although their behavior indicated otherwise. As a previous post argued, individualized education is integral to increasing bicycling.

Even more, though, education is integral to increasing safe, predictable, legal behavior among current and future bicyclists. If we hope to achieve a truly courteous share-the-road culture in which many trips are made by bicycle, we must begin with bicyclist education. That’s why the Bicycle Alliance distributes Share the Road pamphlets (pictured) and why we have two new grants that focus specifically on education for children and adult bicyclists. We are working to create educated bicyclists who know how to use their bikes legally, safely, and predictably.

If that sounds like an exciting future to you, contact us to find out how you can help make it happen.

Edited 10/8/2010 to add: Let me give you some statistics to back up my anecdotal evidence. According to the League of American bicyclists,

As you can see, by being an educated bicyclist who has good bike handling skills and rides predictably and legally, you can eliminate almost 80% of the causes of crashes. This is why bicycle education is so important. It’s not just telling people to wear helmets, but providing them with the skills and knowledge to use bikes for transportation confidently, successfully, and safely.

This article was posted in Attitudes, Education, Go By Bike, Safety, Share the Road. Bookmark the permalink. Follow comments with the RSS feed for this post. Both comments and trackbacks are closed.