Does Nonprofit Mean no Payoff? 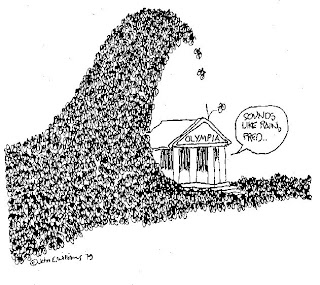 For two decades, Washington Bikes has been working diligently within the political system of our State legislature. Albeit keeping less than a celebrity profile, we have a lot of respected good results to show for our hard earned seat at the table within the Capitol. Yet, within the same time span, earning a seat and wielding influence seem to be mutually exclusive in the Seattle political realm .

The Seattle Times article “Congressman Dicks finds a way around earmarks rule” ( David Heath, Huffington Post Investigative Fund), shed a whole new light on the role of non-profits and how they garner political clout, which usually leads to securing funding for the projects and programs that support an organization’s mission.

The earmarks article provided me with a context for an experience I had recently at a gathering of environmental and advocacy non-profits. The keynote speaker was recently elected King County Executive Dow Constantine. His speech was purely straightforward support for the dedicated work of everyone in the room, and to honor two individuals who had dedicated their careers to fighting the good fight.

During the Q & A afterward, he answered a question about what non-profits could do better given this economy. Constantine’s response was aimed entirely at grassroots organizing: we needed our memberships to attend committee and public meetings, and to keep challenging the status quo as forcefully as possible to make our voice heard. I thought, I have heard many times that the definition of insanity is to keep doing the same thing over and over, expecting a different result.

In my opinion, I felt it was relevant to ask him then why, after years of partnering with local agencies and governing committees, the Bicycle Alliance might have succeeded in getting a seat, but our guidance at the Seattle and King County tables continues to be ignored (or at least filed away for reference). I wanted to hear how he thought we could get through whatever political barrier prevented real influence?

Along with some more “keep up the effort” comments, he closed his answer with a seemingly practical suggestion. Constantine said that the hard “reality” to accept for any 501(c)(3) nonprofit, was that they must consider becoming a 501(c)(4) nonprofit, capable of endorsing candidates. So as I would interpret it, if we need money or tax breaks for a product or program that only the Alliance can provide, where is a Congressman when you need one?

Case in point: I now have experience sitting at tables, contributing (I always assume this) on how to change the transportation infrastructure of Seattle for the better. The Alliance recently took over management of the former Bikestation—improving the amenities into a better resource for Seattle bicyclists—and reinvigorated the bicycle parking facility into BIKE PORT.
The strategy in taking over the facility was to establish an important bicycle infrastructure mandated by the Bicycle Master Plan, and in the process we would also create a viable model for replication anywhere in Seattle and Washington State.

Relatively speaking, I manage a Park and Ride (really a Ride & Park & Ride ) for bicycles. The facility was initially underwritten in 2003, and has since then been subsidized by Bicycle Alliance and its partners King County Metro , City of Seattle, and Sound Transit. And, as most auto drivers do not know or consider, Park & Rides or Transit Center car parking has always been a subsidized (not covered by your bus fare) project in any transportation planning. So despite community demands to create multi-modal transportation choices, the funding of this existing bicycle parking facility is always tenuous, and still a fraction of what automobile parking receives.

Sadly, our expertise and supporting data of the demand for secure bicycle parking is seemingly without any political muscle, and struggles to secure inclusion of secure parking into transportation planning, let alone to earmark future funding. Without funding, the ideal of modeling effective infrastructure, managing a lone BIKE PORT will drain the resources of the Alliance with a worst case example of mission creep.

Because of 501(c)(3) non-profit status, the Bicycle Alliance cannot officially endorse any political candidate. I cannot help but wonder whether secure bicycle parking like BIKE PORT would be more likely to get the funding it needs if the Alliance became a respected force to be reckoned with: not only with the power of lobbying in Olympia and protest actions, but with aggressive pro or con political campaigning.

Cascade Bicycle Club is very public about wanting to be a force to be reckoned with, and they created a separate 501(c)(4) within their organization to actively endorse candidates to their 12,000+ membership. They have the means, and in my opinion, had no other ethical choice but to recently team up with the Sierra Club and Futurewise to file a lawsuit against the Puget Sound Regional Council’s /Transportation Plan 2040. The thrust of the suit is what this blog post is about: that, many, many stakeholders including the Alliance submitted comments, and for all of the good guidance on the supposed goals of the plan, everyone’s input was seemingly ignored.

My question to our membership and allies is whether the Bicycle Alliance should become an organization that can endorse a Congressman that might earmark our agenda once they were elected? I would love to hear from the advocacy veterans on whether this strategy is how we want our work to pay off. Is lobbying more ethical? Should we stick to flash mob and email alert type actions to draw attention to the threats to our efforts and successes? How about press conferences to expose needlessly misguided policies and or a dissatisfaction with lack of progress?

This article was posted in Funding/Policy, Politics. Bookmark the permalink. Follow comments with the RSS feed for this post. Both comments and trackbacks are closed.