Walk a Block on My Crutches 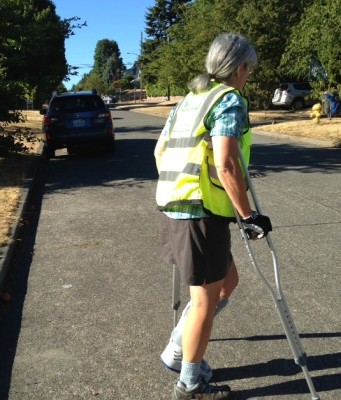 While you were taking advantage of this record setting summer to enjoy bicycling, I’ve been sidelined by a broken ankle. Instead, I have spent the past six weeks navigating my West Seattle neighborhood and the streets surrounding my workplace in Pioneer Square on a pair of crutches. It’s given me a new appreciation for the Americans With Disabilities Act of 1990 (ADA) and a more critical eye on how we design our public spaces.

The ADA prohibits discrimination and ensures equal opportunity for people with disabilities in employment, government services, public accommodations, commercial facilities, and transportation. It’s because of the ADA, that many (but not all) of our street corners have curb ramps, elevators and ramps are installed in our public facilities, and much more.

My neighborhood is a walkable one and I live within five blocks of grocery stores, banks, pharmacies, a hardware store, numerous restaurants and coffee shops, the farmers market, and the transit center. I can walk to almost any service in about five minutes—until I broke my ankle. Crutching to my neighborhood destinations now takes more time and energy in order to rest my shoulders and arms, or take the least hilliest route.

However, I can still make my way around thanks to the changes in the physical environment that have occurred as a result of the ADA. With some planning and prioritization, I still manage to accomplish much of what I need to do. 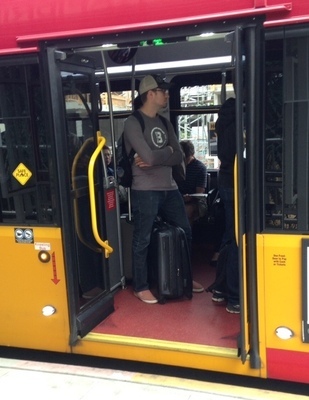 Crutching effectively leaves you without the use of your hands. I learned to put drinks in lidded containers with handles so I could transport them. I got into the habit of wearing clothes with pockets so I could easily carry small things with me. I don’t leave the house without a backpack.

Opening heavy doors are a challenge. Without full use of my arms, I often have to open a door in stages using my crutch to keep to keep a hinged door open while I slip in or out. Automatic doors are my friends!

Stairs suck. Although I can negotiate a short flight of stairs on crutches, I feel vulnerable and awkward. And steps will stop you cold in a wheelchair. 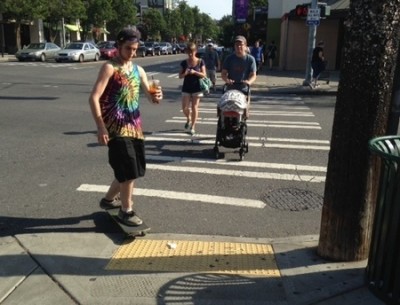 What cyclist hasn’t used an ADA curb cut to cross a street intersection? Those trail and sidewalk ramps make crossing streets easier for parents with strollers, delivery people, kids on skateboards, and people on crutches and in wheelchairs. Those kneeling buses make boarding and exiting easier for moms with strollers, shoppers with carts, folks with wheeled luggage, and me on my crutches.

Who uses those ADA accessible elevators at the LINK light rail station? It’s bike commuters, travelers carrying luggage and packages, parents with strollers, the elderly, as well as the wheelchair user. We all benefit from accessible public space.

This article was posted in Accessibility and tagged accessibility, infrastructure, mobility, public space. Bookmark the permalink. Follow comments with the RSS feed for this post. Both comments and trackbacks are closed.