Bike Theft: Don’t Be a Victim

Today’s post is written by life member Kristi Knodell of Marysville. She is the Shop Manager for Sharing Wheels, a community bike shop in Everett. She offers up tips to prevent bike tips and advice on recovering a stolen bike. This post first appeared on Sharing Wheel’s blog.

“My bike was stolen.”

A day does not go by without hearing about someone losing their bike to a thief. Every one insists they had their bike locked up but I suspect they wouldn’t admit otherwise.

Bike theft in Everett and Snohomish County is on the rise. Some thieves are trying to get from point A to point B and sees an opportunity to do it easier and faster than walking. They often abandon the bike after getting to their destination. Some of the thieves sell the bikes or trade for something they want, usually for pennies on the dollar. And sadly, some thieves turn the aluminum or steel bikes into scrap for pennies per pound.

Many of us use our bikes for transportation to work, grocery shopping, school and anywhere else we want to go. Some of us have transportation choices and also have cars or trucks but choose to use our bikes, opting for an affordable and healthier way to travel. For some of us it is our only means of transportation, lacking the financial, legal means or desire for a motor vehicle.

Losing a bike can be especially hard on those with limited resources. Replacing what is taken can be hardship.

It sounds silly but we have special bonds with our bikes. They give us the ability to move great distances under our own power, allowing for self-sufficiency.

Those who steal bikes are heartless, the scum of the earth. There are movies produced on the theme of bike theft: Beijing Bicycle, Pee Wee’s Big Adventure and The Bicycle Thief. All depict how much the victims loved their bikes and illustrate the great efforts they are willing to make to get their bikes back.

Sharing Wheels does not buy or trade bikes. We have a strict policy we adhere to in order to prevent accidentally obtaining stolen bikes. We rely strictly on donations. Some other bike shops and of course pawn shops buy bikes, making a great outlet for the thieves. The pawn shops are supposed to submit the serial numbers to the local police. There is no one database storing the reported thefts, allowing thieves to travel to neighboring cities and unload. These shops pay pennies on the dollar, begging the question, why would someone sell “their” bike for so little. By purchasing from these shops you contribute to the problem, creating a demand for stolen bikes.

There are some online bike registries. The  National Bike Registry and  Project 529 are two such sites. The City of Arlington Police Department also has a Bicycle Registry  program. Check these programs out if you want to register your bike. 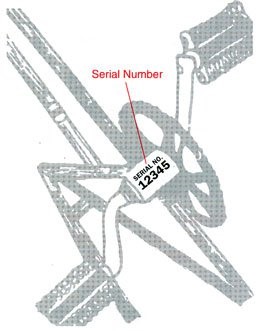 Do the police care? Maybe, maybe not. But there is nothing they can do if you don’t report the theft. Only 56% of thefts are reported (I read that somewhere). When you make a report, you need to have some information from your bike that you write down before it is stolen.

Almost all bikes have a serial number, usually located on the bottom bracket (the cylinder-looking thing that the cranks and pedals come out of). Write down the serial number, make, model, and color and put it in two different safe places with a good photo of your bike. That number is the one thing distinguishing your bike from other bikes, like the VIN for a car. Without it, there is not much to be done.

To avoid having to use this information, it’s important to prevent a theft. Some places you can bring your bike inside (hopefully your home is one of them). But even being inside doesn’t guarantee you will have your bike when you return. Open or unlocked garages can be an easy target. The more locks you can afford the better. Thieves are generally looking for the easy target, but they are getting more sophisticated. Check out Hal Ruzal of New York City on how to properly lock up your bike .

To a Northwesterner,  New York city can seem like a crime mecca and Hal’s advice may seem appropriate for NYC, but what about here in Snohomish County? As I said, a day does not go by without me hearing about someone losing their bike to a thief.

This article was posted in Education, Guest Blogger and tagged bike theft, Everett. Bookmark the permalink. Follow comments with the RSS feed for this post. Both comments and trackbacks are closed.