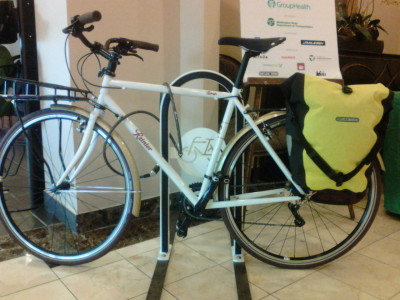 This display showcases products made by companies headquartered in Washington state: a beautiful Raleigh Bicycles Port Townsend model with Rainier Beer detailing loaded with Ortlieb panniers parked on a Sportworks bike rack made in Woodinville.

We capped registration, then pushed the cap, then pushed it some more. An event we thought would reach 100+ participants came to 185 and then some (we may have missed counting a few at the legislative reception Monday night). Thanks to Corey Burger of Victoria, BC, it even became an international summit (an element we’d love to see grow next year).

A few statistics tell one kind of story about the Washington Bike Summit.

Types of businesses and organizations represented:

Percentage of attendees not from Seattle: 71.3% (we reported a slightly higher number the week before the registration closed; Seattle supplied several of the final registrations processed).

Why do we track and report this? Given the population distribution in the state it would be easy to hold a sold-out conference with 100% Seattleites. That wouldn’t represent our statewide mission.

Speakers: Every speaker and every session gave people ideas, information, and inspiration to take back to their hometowns. A special thank-you to everyone listed on our agenda for sharing your stories.

Martha Roskowski of People for Bikes and Samantha Ollinger of Bike San Diego deserve special thanks for their inspiring remarks in keynote addresses, along with Patty Graf-Hoke of Visit Kitsap, Joe Brown of Methow Cycle and Sport, and George Bergner of Port Angeles Likes Bikes and Olympic Peninsula Likes Bikes of our panel on the economic power of bike tourism.

Martha from @peopleforbikes busting myths about “who rides?” with brand new data. #WABikeSummit pic.twitter.com/Y7QyJeflpq — Downtown On the Go (@DowntownOntheGo) March 16, 2015

@LynnPetersonWA to WSDOT engineers: you are allowed to use innovative bike facilities, please do it. #WABikeSummit

@LynnPetersonWA presenting gr8 momentum for WA State #WABikeSummit – be innovative is the goal – make it so! pic.twitter.com/DTIGX3b1qH

Official from @WSDOT: all the ways you can build bike facilities & why you should. @lynnpetersonwa #WABikeSummit pic.twitter.com/YSP7fq1Z4o

Number of people receiving training in the NACTO Urban Bikeways Design Guide: 54. Offering professional workshops drew a large number of professionals to the conference where they could rub elbows with the advocates who attend community hearings and provide input on bike master plan updates — a great mix for future improvements on our streets.

Added bonus for local color: A movie shoot with zombies.

Sponsors: We have to give another big thank-you to our sponsors, who made it possible for us to bring together such a great line-up of speakers.

Last word: We’ll give the last word to Kyla and Josef Forsberg of Lake Tapps, owners of the Green River Cyclery and Busted Bike Cafe in Auburn. As they prepared to depart they both said, “We’ll be at this every year!”

The tweets tell the story another way:

Special thanks to Platinum sponsors Cascade Bicycle Club and Group Health Cooperative, whose early sponsorship made the Summit possible.

Please help us thank our sponsors in social media. When you follow or fan, let them know you appreciate their support of the Washington Bike Summit, #WABikeSummit.