Bridging the Gap in Thurston County

Bicycling in Thurston County just got a lot easier with the third and final phase of the Bridging the Gap project.

The Chehalis-Western Trail provides the backbone of the Thurston County trail network, running 22 miles from Woodard Bay in the north to the Yelm-Tenino Trail in the south. A former railroad used to transport timber, it’s now a vital respite from busy motor vehicle traffic for people walking and rolling in a variety of ways. 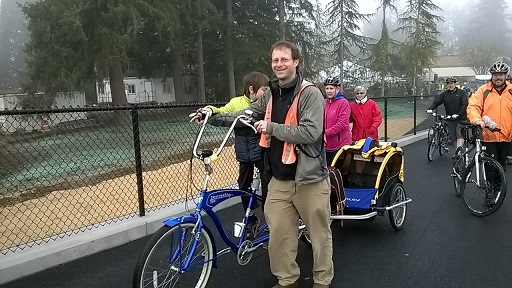 “Yo, you got an electric assist on that bike?” “Nope, just 7-year-old power!”

Fifteen years ago, a coalition of several government agencies and advocates worked together to bridge three major gaps in the north part of the trail. The first bridge over I-5 was built in 2007. The second bridge over Martin Way—which was the main north/south route between Seattle and Portland before I-5—was finished in 2010. Saturday December 13, 2014, the community gathered to celebrate bridging of the very last gap over Pacific Avenue.

You can now ride from the Puget Sound to Yelm or Tenino—or both!—almost entirely (save for about 1,500 feet) on a trail in Thurston County. Yay!

[Tweet “Ride from Puget Sound to Yelm/Tenino; trails 99%+ of the way! #bikeOLY”]

In addition to linking to the Yelm-Tenino Trail in the south—which many of our friends up north know from riding part of the STP on it—the Chehalis-Western intersects with the I-5 Trail and the Woodland Trail, two trails that run east and west. Both are great off-street links between Olympia and Lacey. 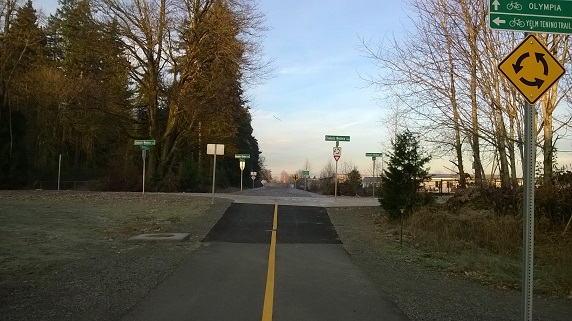 Roundabout at dawn. It really does look like a flying saucer, doesn’t it?

My favorite part of this project is the intersection between the Chehalis-Western and Woodland Trails: the very first bicycle roundabout in Washington State. Squeee! It looks like a flying saucer, doesn’t it?

This was a massive project, and a lot of people dedicated significant time and effort to make it happen. I’m so happy to live in a community that values bicycling enough to pull something like this off.

Courtesy of Twitter we have two videos shared by Kevin VanDriel of Olympia. The first is a fast-paced hyperlapse view of his ride to the dedication; the second shows the Boy Scout troop, band, and hundreds of people who showed up to celebrate.

This article was posted in Infrastructure, Olympia, Thurston County, Trails, Transportation, Travel and tagged Chehalis-Western Trail, Yelm-Tenino Trail. Bookmark the permalink. Follow comments with the RSS feed for this post. Both comments and trackbacks are closed.