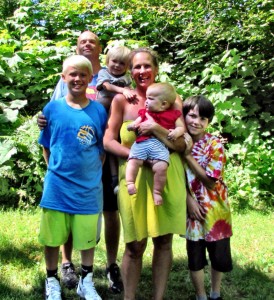 Over the weekend we read the Inlander story about a brash bike thief in Spokane. It’s not often a thief takes action right in front of a reporter who can capture his image, track down the owner of the stolen goods, and get more of the story, but that’s what happened this time.

So it’s thanks to Daniel Walters we know the stolen bike belongs to Paul Dannels: husband, father of 4, a hard-working guy who volunteers in the community, goes for family bike rides, and is trying to train for triathlons, riding 40-50 miles per week. It’s his one and only bike and the family budget doesn’t stretch to a replacement any time soon.

After talking with Paul and hearing his story for ourselves, we knew we wanted to help. We waited to hear whether the police might be able to recover his bike. It appears not; according to a follow-up story by Walters in the Inlander, they’ve caught the bike thief but the bike is nowhere to be found.

This leaves Paul without a bike.

[Tweet “Getting your bike ripped off stinks. Donate to help Paul in Spokane replace his.”]

So who is this guy we’d be helping? He’s the kind of person you want to help. He especially cares about helping children in need become better students. He’s been an AmeriCorps volunteer and coaches young children in baseball at the YMCA.

Paul says, “I live for my wife and children and being outside with them, doing anything fun and healthy, running, swimming and bicycling all the time as much as we can. That is where my family’s happiness is. Losing my bike has been difficult. The outreach and support has been incredible — I do not feel worthy and am very humbled.”

Paul isn’t used to asking for help for himself. When we talked about the possibility of a replacement he said, “Any bike would be fine — used, really old, whatever,” he said.

We know lots of bikes get stolen and it’s not a problem we can solve, human nature being what it is. We can, however, help Paul get a bike. 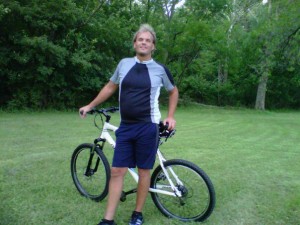 Paul works as a safety manager at Associated Painters in Airway Heights.

Our fundraising goal: $1,000. With this Paul will be able to get a replacement bike of comparable quality, bike seat for use with his children, seriously good bike lock, and other equipment such as a headlight and taillight, bike rack, etc.

Who’s already helping: North Division Bike Shop tells us they’ll donate $100 and would like to work with Paul. Other shops may also be able to help; we’ll update the post to list them here.

[Tweet “Feeling good because I just helped someone replace a stolen bike. You can too.”]

What about your friend who had a bike stolen? We know that in doing this we may get similar requests. For now, we’re just trying to help Paul.

Depending on the community response, we’ll evaluate whether an ongoing bike replacement donation fund is something we can manage given our capacity constraints and the need to verify that a claim is valid so you can feel good about your donation.

What if people donate more than $1,000? We’ll update this post with progress reports so you know how much is still needed. When the donation form is gone it means we reached the goal and we thank you for your generosity. If we run a bit over $1,000, which could happen depending on the way the donations come in towards the end, the additional funds will go to support bike safety education and work with law enforcement in Spokane.

Thank you for helping Paul get back on two wheels with his family!

This article was posted in Alert, Family biking, News, Spokane County. Bookmark the permalink. Follow comments with the RSS feed for this post. Both comments and trackbacks are closed.