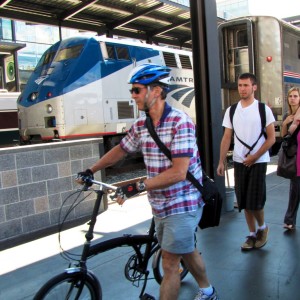 Have you dreamed of traveling to a distant state by train with your bike, but cringed at the thought of having to box your bike for the journey? Dream again. Amtrak roll-on bike service is on its way!

Amtrak announced plans to include bike storage racks on its new long distance equipment. The new baggage cars will be installed on all 15 long distance routes by the end of 2014. That includes the Coast Starlight and Empire Builder routes serving Washington state.

“Roll-on bike service will make me choose Amtrak over air travel every chance I get. I’ve been waiting for this to transform my vacation choices. This will open up a huge market for Amtrak since bike travel is growing like crazy and legs sometimes need a rest,” she stated.

This article was posted in Accessibility, Economic Impact, News, Trains, Transportation, Travel. Bookmark the permalink. Follow comments with the RSS feed for this post. Both comments and trackbacks are closed.