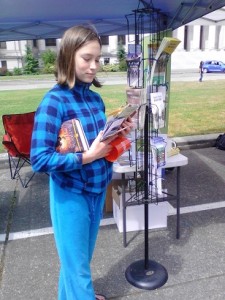 Tianna made our day with her future plans to ride everywhere.

The young girl all in blue rotated our rack of bike maps, pulling one from each slot. Kitsap-Skagit-Pierce County-Walla Walla-Yakima — round and round it went.

“I’m taking one of each because someday I’m going to ride all these places,” she announced firmly.

That’s just what we like to hear! Especially at the first Get Outdoors Day in the state capital, held Saturday, June 14, on National Get Outdoors Day. Booths lined the edges of a green space where kids played and learned (without realizing it). Bands played. People on bikes stopped by to talk about their favorite trails, where they’d like to see more, and where they hoped to ride in the future.

Funnest thing about our rack of bike maps from around the state at an event: People start planning their bike adventures on the spot. 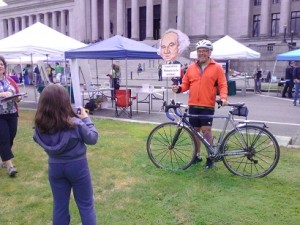 Volunteer Mark Jessel poses for a picture with the George Washington “I cannot tell a lie” prop.

While the skies threatened at times and the wind caught canopies and banners more than once, the sun shone enough to tempt people down to check out the displays. Volunteer Mark Jessel helped field questions, offer advice, and invite people to sign up for our e-news to learn what’s happening for better bicycling.

Remarks from Washington State Parks Foundation executive director John Floberg, and from Don Hoch, State Parks director, emphasized both the incredible assets Washington has in its parks and the severe threat they face due to steep cuts in state funding for this legacy for generations to come.

We support your love of this beautiful state. We rock! And bike & climb & fish &…-Jon Floberg @WAStatePks Fdn exec drector at #WAoutdoors

Washington Gov. Jay Inslee closed out the event by telling all the attendees that Washington has the most beautiful lakes, rivers, beaches, mountains, and parks in the world — and reminding us all that we need to invest if we hope to maintain their quality for generations to come. He told stories about biking to various state parks such as Palouse Falls and marveling at the diversity of scenery and recreational opportunities Washingtonians enjoy.

“Washington’s great outdoors is important for our kids, for our health, and for our economy,” he declared, noting the significant economic impact and the 227,000 Washington jobs in the outdoor economy.

Jobs in outdoor recreation number more than aerospace and IT combined, distributed across the state from outfitters and guides in rural areas to major retailers like REI to manufacturers like Outdoor Research (Outdoor Industry Association research on the outdoor economy in Washington).

Applause line when @govinslee asks if people will talk to #WAleg about stable, sufficient funding for @WAStatePks 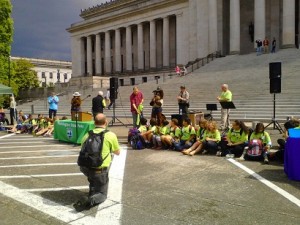 Gov. Jay Inslee shakes hands with the young outdoor adventurers preparing for their campout at the capitol.

Gov. Inslee shook hands with the boys and girls waiting for their Capitol Campout: 24 kids in bright green shirts, outfitted for camping thanks to donations from Coleman, preparing to sleep out on the lawn at the governor’s mansion.

When he stopped by our booth he said he loved our logo and wants one of our jerseys, so of course we had to get a picture. 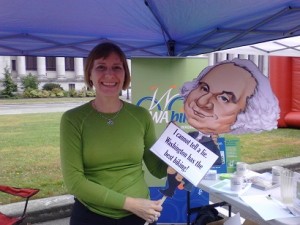 Of COURSE Washington has the best biking–we’re the #1 Bicycle-Friendly State in the country.

Share your ideas about the future of parks and outdoor recreation in Washington via the online townhall being conducted as part of the Governor’s Task Force on Parks and Outdoor Recreation. Search previously posted questions to see other people’s answers and add your thoughts, and sign up to receive notice of new questions via email. The task force wraps up our work by mid-September with recommendations to the governor.

This article was posted in Adventure, Advocacy, Economic Impact, Events, News, Olympia. Bookmark the permalink. Follow comments with the RSS feed for this post. Both comments and trackbacks are closed.