On Wednesday evening, October 2, I testified at a state Transportation Committee Hearing at Central Valley High School in Spokane Valley. Two minutes proved to be too short to say what I’d intended. I told an abbreviated version of this story without really getting to the point I meant it to convey.

The location of the hearing was particularly fitting—the nexus of my entry into bicycle advocacy.

All three of my children graduated from Central Valley High School. The street that runs in front of the school is Sullivan Road. Every Wednesday evening from March to November with rare exception, I ride on Sullivan Road past the school to my local bike shop, Wheel Sport East, where I meet a group of 20-50 other cyclists for a weekly group road ride—a ride I missed in order to testify. 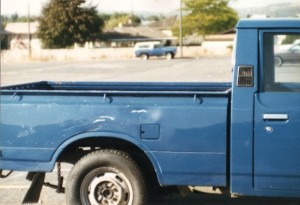 On a September morning some years ago, while my oldest son was sitting down to his first class of the day, I was riding my bike past Central Valley High School on my way to work. A fellow student of his, a young man with a drivers license barely 2 weeks old, made an unexpected and illegal left turn in front of me. I made a bone crushing impact into the side of his vehicle and landed in a heap in the middle of Sullivan Road. With sirens in the distance growing closer, the young man stood briefly over me as a small crowd gathered and a kind stranger held my head and the one hand that still looked anatomically correct. Then he turned and left—off to class.

My wife had dropped my son off at school and noticed the traffic back-up, but hadn’t seen me laying in the road and my crumpled bike tossed aside. She got the call shortly after she returned home. My son met her in front of the high school and they gathered the rest of the family to meet me at the hospital.

Weeks later, still in a surgical cast, bones repaired with plates and screws, I sat in a traffic court witness box where the young man had contested his citation for failure to yield.

“I didn’t hit him. He hit me!” he argued, father at his side, coaching him.

“Why did you leave the scene and go to class?” the judge asked.

“He was on a bike. He wasn’t in a car. He shouldn’t have been there! It had nothing to do with me.”

I’ve endured shouts, had things thrown at me, been run off the road, spit on, even pepper-sprayed by a motorist at a stoplight irate that I was occupying a traffic lane—no matter that there were 2 lanes each way and we were the only two vehicles on the road at the time. To be severely injured, however, nearly killed by another human being who felt no remorse or responsibly because he assumed I just simply didn’t belong is his way was unbearable.

I began advocating for bicycling shortly afterwards—responding to anti-bike letters to the editor, commenting at city council meetings on issues of transportation safety, and eventually accepting a volunteer position on the board of directors at Washington Bikes. 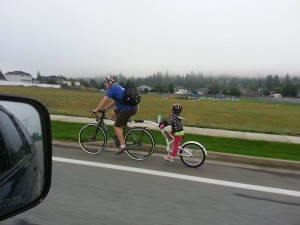 On the way to Spokefest with my 4-year-old granddaughter.

A lot has changed since that accident. Spokane Valley is a safer place to ride. We have bike lanes and designated bike routes that didn’t exist then. On a Sunday morning last month, had you been up early, you might have seen me riding past Central Valley High School with my four-year-old granddaughter on a Trail-a-Bike behind me. We rode a section of Sullivan road with a bike lane—new since the accident. We also road the same, narrower section without a bike lane directly in front of the school, past the very spot where I laid in the road while her father-to-be was arriving for classes.

I passed that spot, as I usually do, without even a thought to the past—happy at that moment to be sharing my love of cycling with my granddaughter. Happy to join some other cyclists at my local bike shop on Sullivan Road and ride with them downtown to Spokefest, an annual event, also new since that accident. We joined nearly two-thousand other cyclists—two thousand!—for a celebration of our favorite form of transportation—cycling!

Much has changed. Much has not. Although fewer, I still endure shouts from passing cars ordering me off the road. “Idiot! You’re not a car!” one young man shouted recently from a car on the other side of the road. I laughed out loud. Indeed. I’m not a car. I’m a human being, a fellow traveller on the road, a father, a grandfather, a husband—happy to be enjoying the ability to ride and the community I live in.

I was accompanied to the hearing by a good friend, his arm in a sling, fresh scars from surgery to repair a shattered collar bone. Three weeks prior, he and I were on a group ride together. Coming down a hill from a neighborhood at the south end of Sullivan Road he caught a wheel in a construction cut in the pavement in the low light of dusk. It grabbed the wheel and pitched him over the handlebars.

He wasn’t a car. If the hole in the road had been big enough to damage a car, there would have been barricades and flashing lights. But a bike? Why worry about at hole in the road that’s only a danger to bicyclists?

When revenue for transportation projects is tight and budgets constrained, bike and pedestrian projects are often the first to go. The most vulnerable road users—bicyclists and pedestrians—pay a disproportionate cost for those cuts. They pay with broken bones and lives. And unnecessarily.

Bicyclists and pedestrians help stretch our vital transportation funds. They relieve pressure on roads with limited capacity. Every bike on the road leaves more room for the remaining automobile traffic, and more parking space at their destinations. They cause less wear and tear. There are a long list of benefits to both the motorists and the individuals who choose to walk or bike.

When budgets are tight, our first concern should still be safety.

So, the hearing at Central Valley High School was very close to home, literally and metaphorically. I sat there wondering if my granddaughter would some day sit in the same theater as a student. And I wondered if she’d be able ride her bike to school safely past the spot where I laid in the road, broken. I hope so. I intend to do all I can to ensure it.

This article was posted in Advocacy, Attitudes, Funding/Policy, Infrastructure, News, Politics, Safety, Spokane County, Transportation. Bookmark the permalink. Follow comments with the RSS feed for this post. Both comments and trackbacks are closed.