Taking Stock of the 2013 Washington Legislature: Part 1 – Victories and Thanks

With the 2013 Washington Legislature’s regular and special sessions complete, Washington Bikes reviews our victories, disappointments, and outlines next steps. Part 1 catalogues our victories and thanks you and our legislative champions for the hard work and support that gave us the policy and investment victories to continue growing bicycling statewide.

Lasting almost six months, 2013 marked one of the longest legislative sessions in Washington state’s history. It was a marathon, for sure, and we can’t thank you enough for your support and outreach to our elected officials. Your emails, calls, and letters show the 2013 Washington Legislature the import of improving safety, connectivity, and mobility for Washingtonians.

Because of your help and hard work in contacting state legislators to let them know your priorities, we can count the following victories to grow bicycling statewide. 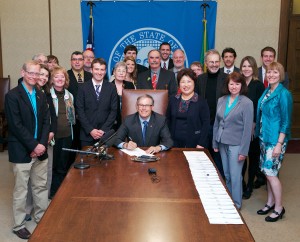 In addition to Representative Ryu’s fantastic support, thanks go to Senators Andy Billig and David Frockt for seeing it through to become the very last policy bill passed in the senate before the session cutoff.

Washington Bikes is now working with our partners to work on early implementation for this law, which will become effective on July 28, 2013. 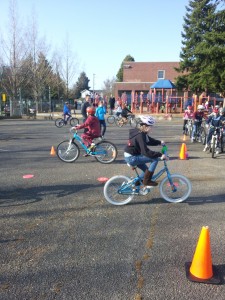 Combined, the bicycle/pedestrian safety and mobility and safe routes to school grant programs for the 2013-15 biennium now total $30.45 million – this two year figure equals about half of the entire investment made over the previous 8 years! Progress is being made.

Through our direct advocacy in the past 12 months, Bicycle Alliance has led the charge for protecting $11.7 million in federal funds for the Safe Routes to School grant program. Over the next two years, these investments will fund 28 school safety projects statewide.

SB 5263, Concerning motorcycles overtaking and passing pedestrians and bicyclists. While originally not included in this legislation, an amendment facilitated by the Bicycle Alliance and Cascade Bicycle Club and introduced by Senator Christine Rolfes added a 3-foot passing distance requirement for motorcycles overtake bicycles and pedestrians in the travel lane. This legislation provides everyone who supports sharing the road an important and incremental start to develop a uniform safe passing law that incorporates a 3-foot passing requirement.

Trail investments statewide. We’re still combing through the lists but a great victory includes $700,000 to extend Anacortes’s Guemes Channel Trail. One of that city’s top legislative priorities, this trail still needs additional funding to complete it – something we were fighting for in the transportation revenue package that failed on the final day of session. Special thanks go to Senator Kevin Ranker and Representative Kristine Lytton for their work on securing this investment.

Some of the additional great trail projects included as community priorities and investments in the Capital Budget for 2013-15 include: 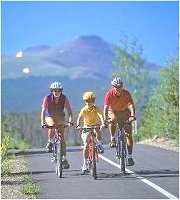 What does it mean?

Thanks to your help and the hard work of many legislators from around the state, 2013 brought Washington:

For the rest of the story see Part 2–What Didn’t Go Our Way.