From Dusk ’til Dawn: Good Times at the 2012 Nine to Five All-Night Bicycle Scavenger Hunt

photos by the author except as noted. 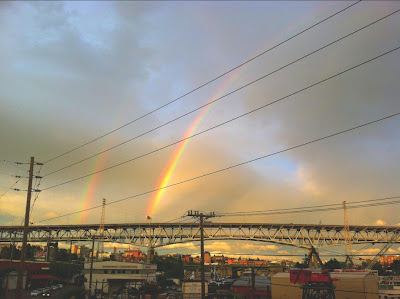 James Grindle photo
The fourth annual Nine To Five All-Night Bicycle Scavenger Hunt had an auspicious beginning as declared by a double rainbow that appeared when the sky cleared after some rain drops and intimidating clouds. This ride, organized by Go Means Go began and ended at Gasworks Park in Wallingford. 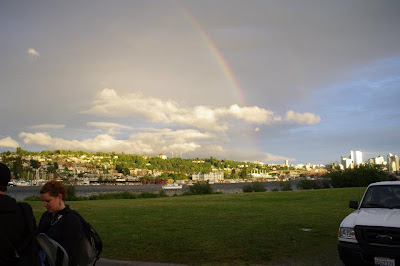 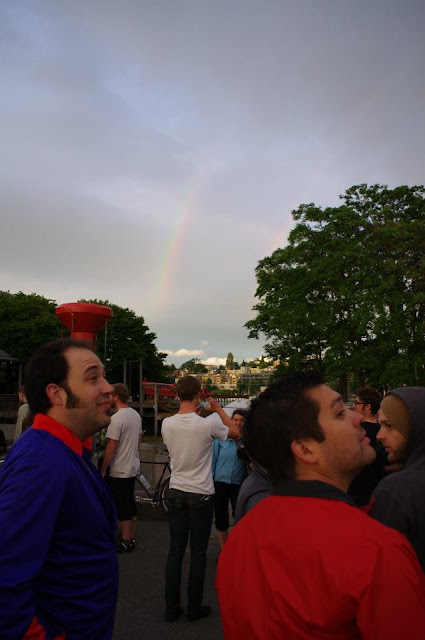 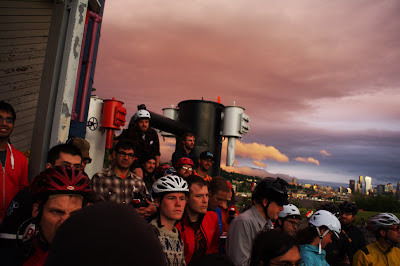 Participants receive final instructions before the ride starts
This was my first time participating in the Nine to Five, and the first time that I’ve stayed up until dawn in more than a decade.

The ride was a blast. There were about 75 participants, some solo riders and others organized into teams of up to five riders. I teamed up with Benjamin Rainbow of Back Alley Bike Repair and James Grindle to compete in the scavenger hunt. 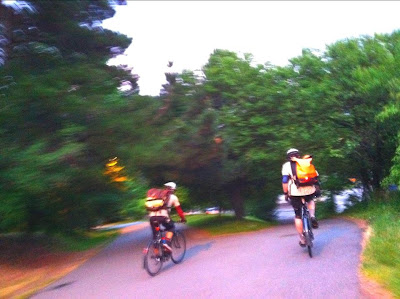 And we’re off! (James Grindle Photo)
The challenges were issued on three manifests which were distributed progressively through the night; participants received one at the start and the second at midnight and the third at 2:30AM. 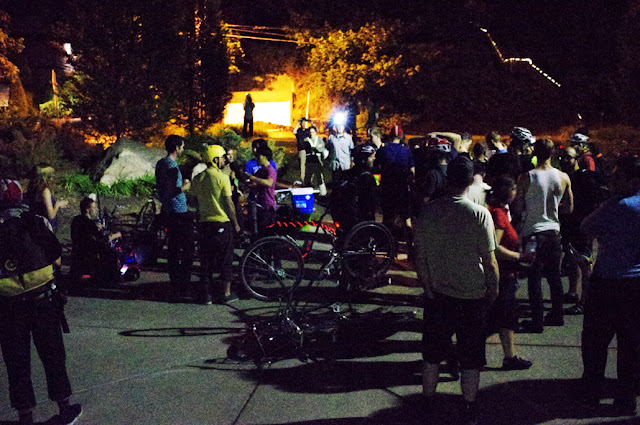 Midnight meetup at the Collonade

2:30 AM meetup at Ly’s Donuts on 45th and Roosevelt
Riders earned points by:  1.) collecting items specified on the manifest,2.)fullfilling photo opportunities from the manifest, and/or 3.) completing “Shoot for the Moon” challenges by riding to farther flung locations to find a cryptic message on a sticker stuck to a sign post.

Our team of three completed all three shoot for the moon challenges by assigning one to each teammate, this way we each got to put on some miles. I made a fifteen-minute sprint to Mercer Island from Pioneer Square at about 1:30 AM and was able to make it back to the U-District for the 2:30 rendezvous. To complete the other two shoot for the moon challenges, Ben rode to West Seattle and James rode to Meadowbrook Pond. The photo opportunities provided some of the most fun, forcing participants to have spontaneous interactions with strangers. For example we had to pump gas for a stranger. These guys were Dick’s Drive-In employees getting off the late shift and were happy to let us pump their gas. 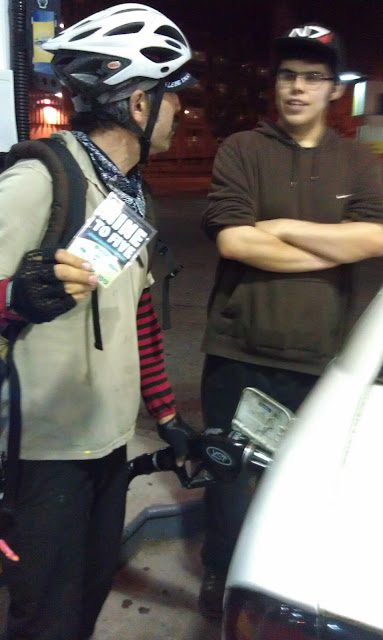 Ben pumping gas for a couple of Dick’s employees 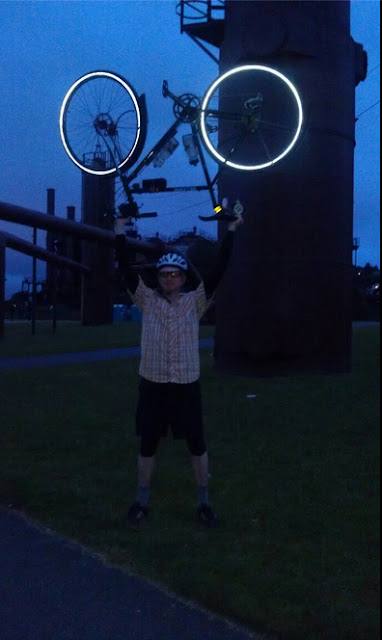 the author at Gasworks, 5AM bike lift (Ben Rainbow photo) 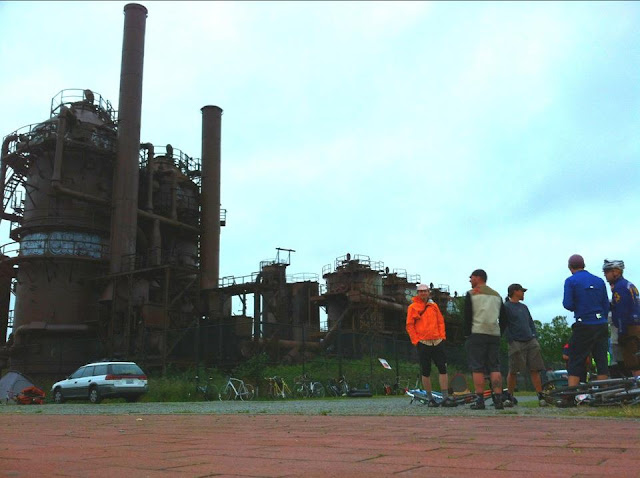 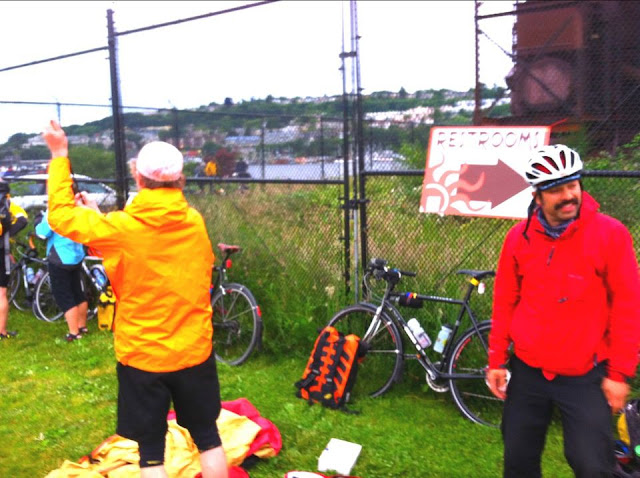 Josh pitching the tent at the finish for 5 extra points. Ben’s in a daze for zero points. (James Grindle Photo) 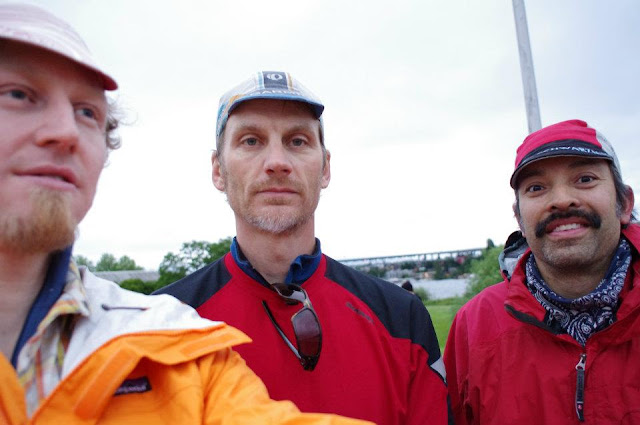 The team is ready for some sleep after earning 315 points

Fun was had by all participants except for a few who had mechanical failures or had their bike stolen during the hunt! I managed to get 5 hours of sleep on Sunday morning and only had to cut short my work day on Monday by a couple of hours. 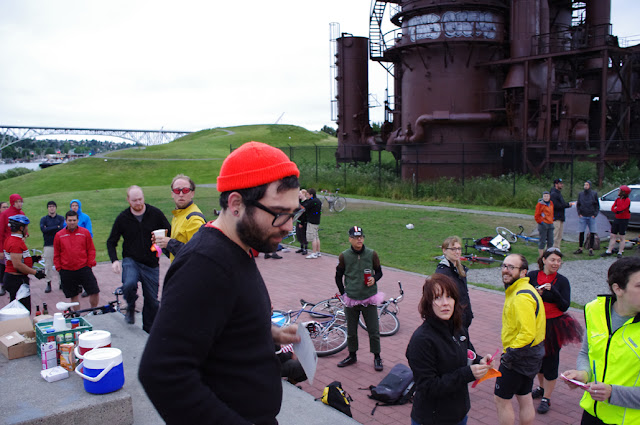 Greg Mertzlufft addressing the group from the podium ten hours after registration opened. 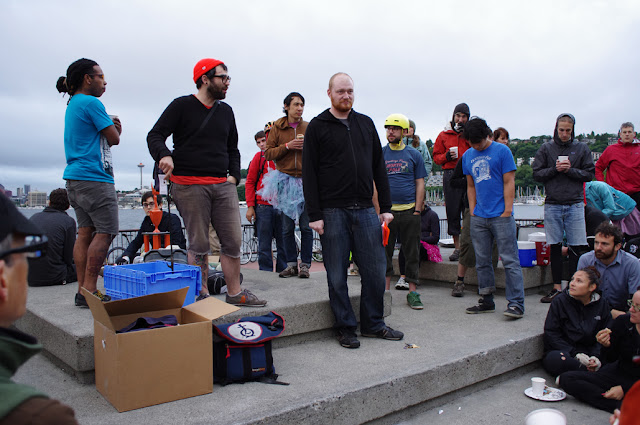 The trophy and other prizes 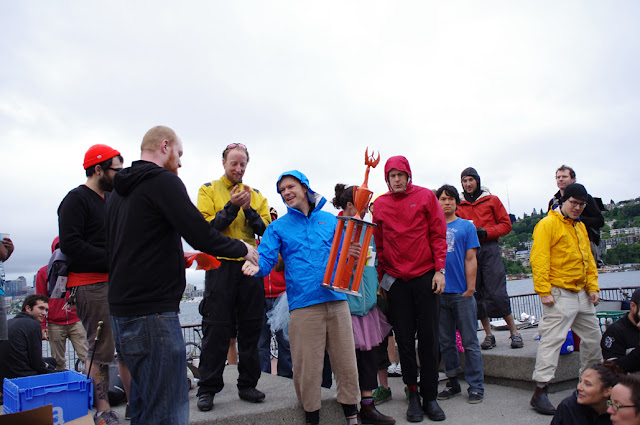 The winning team accepts their trophy!


So just days later and it’s back to regular daily life, but the 2013 Nine to Five is already beckoning.

This article was posted in Adventure, Bike Culture, Encouragement, Events, People, Seattle. Bookmark the permalink. Follow comments with the RSS feed for this post. Both comments and trackbacks are closed.