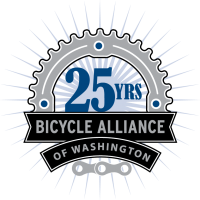 When a dozen Seattle cyclists gathered in the fall of 1987 to create a new organization, email, Facebook, Twitter, and blogs were the realm of science fiction and fantasy. Those cyclists came together as the Northwest Bicycle Foundation and their vision was a 24/7 advocacy organization with “more people bicycling more often.” To say that the world has changed drastically in the last 25 years would be a complete understatement. Indeed, many more people are biking, and millions of dollars are spent on bicycle facilities from trails to safe routes to school to cycle tracks. Today that fledgling group from 1987 is called Washington Bikes and we have grown from a few dozen Seattle advocates to an army of thousands across Washington – focused on growing bicycling statewide. And what a quarter century it has been as we’ve grown from an attic office with a part time executive to our new headquarters in Pioneer Square with statewide program managers, and newly hired policy director and development manager. Notable achievements include:

To celebrate our 25th anniversary, we’re planning a fall anniversary celebration where we’ll launch our new website and unveil our new logo. You’ll get a chance to meet our new executive director, and say goodbye to outgoing ED Barbara Culp. Stay tuned for details!

This article was posted in Advocacy, Education, Funding/Policy, News, Safe Routes to School. Bookmark the permalink. Follow comments with the RSS feed for this post. Both comments and trackbacks are closed.