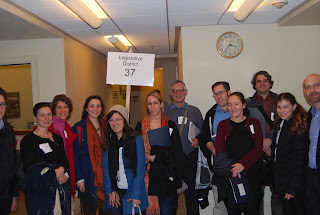 Legislative District 37 outside Senator Kline’s office
More than a few years have passed since I finished my bachelor’s degree in Political Science and it has been at least that long since I volunteered myself to sit in any congressional hearings. Transportation Advocacy Day in Olympia on January 31st was successful in transcending all doubts I had harbored about advocacy and citizen-based lobbying. Almost two hundred people showed up to learn about and advocate for bills before the House and Senate, which included SHB 1217 – Neighborhood Safe Speeds for Cities and Towns, HB 1700 – Safe and Flexible Design Guidelines, and HB 2370 to include establishing a “health goal” within statewide transportation policy goals.
As a novice transportation advocate, I felt fortunate the sponsors of Transportation Advocacy Day provided substantive information packets which included individual cheat sheets for the bills and a glossy informational piece to hand to legislators or legislative aides. The morning started out with an introduction by Representative Joe Fitzgibbon (D-34) and was followed by additional information from Carrie Dolwick with Transportation Choices Coalition about our day’s legislative priorities. Next we chose from a variety of breakout discussions to attend that focused on topics like simple fixes for safer streets, incorporating health into transportation and practicing for meetings with our legislators.
Being a talker, I met a fair number of people attending Transportation Advocacy Day for different reasons. I met a mother who had lost her son when he was hit from behind while biking in a bike lane. The collision catapulted him over 100ft onto the road shoulder ahead. She wanted to know what State government was doing to increase safety for bicyclists. I also met the regional general manager from Zipcar (a sponsor of Transportation Advocacy Day), who was attending because Zipcar is committed to advocating for an integrated alternative transportation system that allows people to move about easily without owning a car. I also learned that Zipcars come with bike racks! I even met many of my actual neighbors in Seattle’s Central District, one of whom I had rideshared with down to Olympia.
By lunchtime I had found “my” group, legislative district 37, for meeting Senator Adam Kline, Representative Eric Pettigrew, and Representative Sharon Tomiko Santos. We met and formed a game plan. We wanted to share a few personal stories and goals with each legislator, and be able to advocate for the bills (some of which had already passed-for which we would express our thanks). I felt confident talking about helping organize the Central Seattle Neighborhood Greenways group, and when the time came I even invited Representative Pettigrew to the meeting, to which he said, “maybe!”
Overall I feel good about the opportunity to meet with elected officials, or their legislative aide (in the instance of Senator Kline and Representative Tomiko Santos) and putting faces to the names of their constituents. If presented with the opportunity again I would have more diligently prepared a sentence or two about the positive impact I would experience if the bills were passed and funded, but otherwise I felt Transportation Advocacy Day a success. I met some great people and feel like I exercised my right to meet with legislators I’ve elected (well, indirectly, since I am a recent transplant to Seattle after all).

This article was posted in Advocacy, Events, Issues & Advocacy, People, Transportation. Bookmark the permalink. Follow comments with the RSS feed for this post. Both comments and trackbacks are closed.