Alert: Planned Tree Removal will Destroy the Greenway Feel of the Interurban Trail

By Guest Blogger | Published July 8, 2011
Today’s post is written by Lance Young of Shoreline.  Lance is a cyclist, concerned citizen, and the Director of the Outing Club. 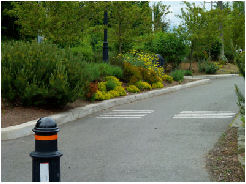 Seattle City Light is planning to remove all the trees under the power lines along the Interurban Trail north of N 145th Street this summer rather than continue to prune them every few years to cut their costs of doing business. The natural barrier provided by the trees may become a man made barrier of wood and cyclone fences, as it has in other sections where the natural greenery has been removed.
This is what the trail corridor looks like today: 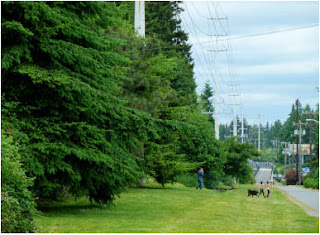 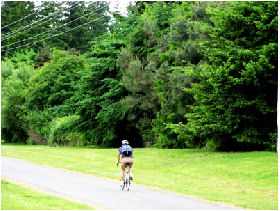 This is what it may become: 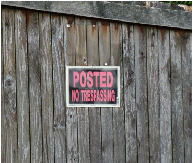 The power company claims they will be replacing the matrue evergreens they remove with low growing bushes like this section of the trail. 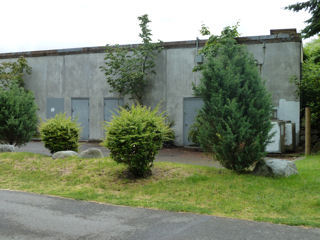 It is of course important for the power company to maintain the transmission lines and electric service to the many customers they serve. According to the representatives from the the power company, one of the primary concerns of Seattle City Light is to lessen the work required to come out every few years and prune or top the trees, and it may well be less costly in the long run for them to just remove the trees entirely.


However, this corridor is also a greenbelt with a prominent regional pedestrian and bike trail.  The interests and well being of these many users should be an important consideration in any decisions made here. Currently and over the past many decades this vegetation has been pruned and maintained to preserve the shade, the wildlife habitat, a weather barrier, and sound and visual barrier between the adjoining commercial and residential communities.  These benefits should be maintained and enhanced, not removed.

The trees along the trail provide wildlife habitat for local woodland creatures including: squirrels, chipmunks, woodpeckers, owls, and several other species of birds including flickers, finches, Steller’s jays, blue herons, hawks, and many others. These trees provide shelter not only for wildlife but local residents and greenway users as well. Though the Interurban Trail is just a short distance from Aurora Avenue these many trees provide a significant sound dampening effect for the neighborhood and trail.  They also provide a significant moderating influence on wind and weather blowing through the area. Further, the removal of the trees at the street end of 149th would open up the access to this undeveloped street right of way to trail traffic which is better directed to the 148th street access.
For all of these reasons these trees should really be maintained rather than removed. In addition, removal of these mature trees will change the character of the neighborhood and the trail, and the natural barrier between the commercial properties along Aurora Ave and the residential neighborhood. The greenway view would change from mature evergreen trees to apartment units, businesses and light industrial. These many mature trees have become such an important part of the community in this area, that their removal would truly be a great loss.
The power company says they will be setting up community meetings, but that the purpose of these will be only to tell everyone what they are going to do, not to solicit suggestions or input. The plan is to remove the trees sometime this summer (August-September 2011).
What to do
If you appreciate the trees along the Interurban Trail and would like to comment on this project, below are several contacts:
Seattle Mayors Office
(The power company is accountable to the Mayor)
Mike.mcginn@seattle.gov
600 4th Ave  #7
Seattle, WA 98104
206-684-2489
Shoreline City Council
(Shoreline has the Interurban Trail right-of-way)
council@shorelinewa.gov
206-546-1303
Brian Breedon (public works, nice guy)
206-801-2441
Seattle City Light
(planning the tree cutting project)
Brent Schmidt
brent.schmidt@seattle,gov
700 5th Ave  #3300
Seattle, WA 98104
206-386-1663

8/19/2011 Update:   The City of Shoreline has asked Seattle City Light to hold a public meeting regarding the planned removal of trees along the Interurban Trail corridor.  The meeting will be August 23 at 6:30 pm at Pacific Learning Center, 14550 Westminster Way N.

This article was posted in Advocacy, Alert, Guest Blogger, Seattle, Sustainable Living, Trails. Bookmark the permalink. Follow comments with the RSS feed for this post. Both comments and trackbacks are closed.