Get out of my bike lane!

Does this look familiar?  I regularly encounter parked vehicles that take a portion of the bike trail.  I spotted this particular offender last summer on Seattle’s Waterfront Trail. 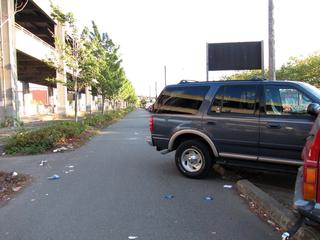 Or maybe you’ve come across a vehicle or two–or five!–parked in your bike lane.

If you have your cell phone handy, you could call and report the violator and hope justice will be served.  Or you can snap a photo, record the location details and the license plate, and post it on a website called My Bike Lane for all the world to see.

New York City tops the list with over 6000 bike lane violators posted, and the top offender is a UPS truck with 28 recorded violations.  Seattle and Spokane are represented on My Bike Lane, with 32 and 56 recorded violations respectively.  I don’t know if any of the reported violators on My Bike Lane get their just dessert as a result of this public outing, but I suspect that the individuals who report them feel some satisfaction by reporting the scofflaws.

If you live in Spokane, you have another course of action available to you.  Snap a photo of the offending vehicle, then email it along with license plate number and location details to the Spokane Police Department at carparkedinbikelane@spokanepolice.org.  The police send a letter to the violator informing them that they are not allowed to park in a bike lane.  Repeat violators are supposed to receive a citation.

Bradley Bleck of the Spokane Bicycle Advisory Board reported several bike lane violators using the system.  He received one email confirmation from the police department confirming that they sent a warning letter to the violator, but he doesn’t know if there was follow up on his other reports.

Although there may some inconsistencies regarding follow up, the Spokane Police Department demonstrated a willingness to work with local bicyclists by establishing a reporting system.  How do you report bike lane violators in your community?

This article was posted in Attitudes, Legal, Safety, Seattle, Spokane County, Transportation. Bookmark the permalink. Follow comments with the RSS feed for this post. Both comments and trackbacks are closed.