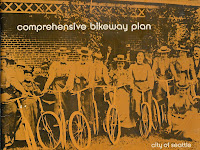 Eric Berg of JRA Bike Shop recently got his hands on a copy of Seattle’s first bike plan and he shared it with us. We have posted a copy of the 1972 Comprehensive Bikeway Plan on our website for your reading pleasure.

In 1972, Seattle had only 8 miles of trail where a cyclist could “ride without fear of an automobile running him down.”  The city also had 32 miles of “bicycle safety routes”–routes on park boulevards or residential streets that were meant for recreational cycling.

Recommendations from this first plan included establishing bike routes with a transportation function, developing a voluntary bicycle registration program, and establishing a program to help install bike racks in key locations around town (only one or two bike racks existed in the Central Business District in 1972),

Fast forward to 2007.  Seattle now has 40 miles of trails, 25 miles of bike lanes, a 24/7 indoor bike parking facility and, following an intense public process, City Council approves the Seattle Bicycle Master Plan.  This aggressive ten-year plan calls for tripling the amount of trips made by bike, reducing the rate of bike crashes by a third, and expanding the bicycle facility network to over 450 miles. 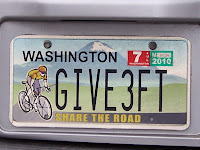 According to a March 2010 progress report posted on the Seattle Department of Transportation (SDOT) website, bike plan accomplishments include 93 miles of bike lanes and sharrows, 31 miles of signed bike routes, installation of 801 bike racks-including 3 on-street parking facilities, distribution of over 60,000 bike maps, and funding the Bike Smart education program.

While there is much more to accomplish if Seattle is to achieve its ten-year goals outlined in the Bicycle Master Plan, the progress that has been made in the past three years is noticeable.  And if you compare today’s bike infrastructure to what existed in 1972, what a difference a few decades have made!

This article was posted in Advocacy, Attitudes, Funding/Policy, Infrastructure, Seattle, Transportation. Bookmark the permalink. Follow comments with the RSS feed for this post. Both comments and trackbacks are closed.