Streets for all? It’s up to you. 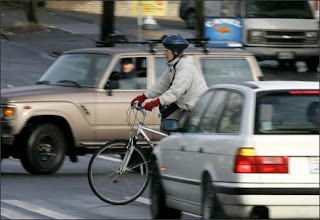 The Seattle City Council is considering its 2011 budget priorities; make sure they know that you want them to fund complete streets

Avid readers of the blog—and we know that your numbers are legion—may recall an earlier post about Seattle’s woefully-underfunded bicycle and pedestrian master plans, and the citizen-initiated movement to make them those plans a reality and fund transit service in the City. Called “Streets for All,” that movement has been endorsed by the Bicycle Alliance and numerous other organizations.

Now’s the time for Seattle cyclists, and anyone who cares about walking and transit in the City, to join the Streets for All effort and let your voices be heard at City Hall.
The City’s annual budget process is grinding slowly but inexorably forward. The city council is in the midst of considering next year’s spending proposals and priorities, and budget hearings are set for the evenings of Sept. 29, Oct. 13 and Oct. 29.  The lobbying from various interest groups has already begun, and the council needs to hear from you.
There are two ways that you can help:

Show your support by going to one of the three public hearings and speaking. Remember, attending an important public hearing is like going to the dentist: it’s not how you’d rather be spending your time, but it’s well worth the effort in the long run.

This article was posted in Uncategorized. Bookmark the permalink. Follow comments with the RSS feed for this post. Both comments and trackbacks are closed.