Rumbling about rumble strips pays off

As a bicycle advocate, I’ll take every victory I can get and one just crossed my desk. But first the back story…

In May, my phone rang with this admonishment, “Rumble strips are being cut into the shoulder of SR 525 on Whidbey Island right now! What’s going on and what are you doing about it?”

Yikes, and I was just talking with Adventure Cycling Association’s National Bicycle Routes staff about Highway 20 as a Washington treasure. I hopped on my trusty bicycle, loaded up my panniers and headed south on Whidbey Island with my husband Andy. We rode for the next two days crying in frustration and anger to see rumble strips carved into the shoulders of a premier cycling route. 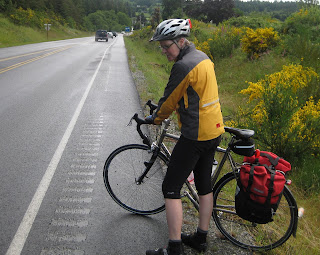 Upon returning home, I armed myself with this picture and headed to Olympia confident but very unhappy that rumbles had been cut seemingly without regard to Washington State Department of Transportation (WSDOT) guidelines.

I met with Transportation Secretary Paula Hammond and two of her staff: the WSDOT Bicycle and Pedestrian Coordinator and the person from WSDOT’s Design Office responsible for writing the Design Manual. I explained what had happened and showed them the photo. I asked that the Design Manual be amended and updated, and I asked for an evaluation of the rumble strip installation on Whidbey Island. That was in June.

Now, in July, some good news! An evaluation by WSDOT headquarters staff validated my appraisal that rumble strips on SR 525 were incorrectly installed along guardrails and other locations, and will be paved over later this summer–SUCCESS! Rumbles on SR 20 were also incorrectly applied and will be paved over next summer–PARTIAL SUCCESS! Changes were made to the Design Manual regarding outreach–MINOR CREDIT! More work needed.

Is it a victory that I rode the length of Whidbey Island in the rain with my crabby husband to tell WSDOT that they had done something incorrect and unnecessary? That rumbles affect bicycle safety and interstate tourism? I’ll claim the victory when rumbles are used sparingly for the safety of all roadway users. Watch for action alerts as the Bicycle Alliance plans to act proactively to stop this type of installation.

What’s a rumble strip and why should I care?

If you ride on city streets or county roads, chances are you won’t ride across rumble strips. However, anyone out riding the highways and byways of Washington for recreation, health and happiness should care because a safety feature for motorists can create a serious safety hazard for cyclists.

To paraphrase the US Department of Transportation a shoulder rumble strip is a “longitudinal design feature” which is a series of indented cuts in pavement intended to alert inattentive drivers through vibration and sound that their vehicles have left the travel lane. For more info, check Federal Highways Administration’s Rumble Strips FAQ.

This article was posted in Advocacy, Funding/Policy, Infrastructure, Safety. Bookmark the permalink. Follow comments with the RSS feed for this post. Both comments and trackbacks are closed.