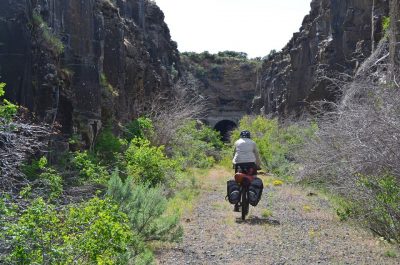 Washington Trails Association and Washington Bikes wrote this joint letter to the State Parks and Recreation Commission that will be shared at today’s meeting in Clarkston concerning the John Wayne Pioneer Trail and recommendations of the Advisory Committee on which both organizations have been represented.

Dear Members of the Washington State Parks and Recreation Commission:

As organizations that collectively represent thousands of members who ride and hike on Washington state’s trails, we are writing to urge continued support of the John Wayne Pioneer Trail.

Representatives from Washington Bikes and Washington Trails Association were appointed to Washington State Parks’ John Wayne Pioneer Trail Advisory Committee. Over the past seven months we have worked with State Parks and other trail stakeholders to develop recommendations for addressing a variety of trail issues. We thank Washington State Parks for its commitment to working with group like ours on this important process.

Through Washington State Parks’ public outreach process to develop recommendations for the future of the John Wayne Pioneer Trail, a spotlight has been put on the trail. Our organizations have heard from many hikers and bicycle riders who value the trail and would like to see it developed to its fullest potential as the largest cross state trail in the country.

Clearly significant work remains to fully realize the vision of the John Wayne Trail, including trestle and trail surfacing improvements and the development of critical trail infrastructure such as trailheads, campsites and water provisions along the trail. Prioritizing investments for development of the eastern portion of the trail is critical to the trail’s future success as a national cross state trail that not only draws Washingtonians to travel it, but those who are eager to travel the trail’s length from around the country. In addition, enhanced coordination between State Parks and Washington Department of Natural Resources (DNR) to develop both the Beverly Bridge crossing over the Columbia, as well as DNR-controlled properties immediately east of the Columbia is necessary.

Our organizations urge the Commission to harness the energy and public interest of the John Wayne Pioneer Trail planning process and prioritize project investments that will greatly benefit the trail now and in the future. We recognize and appreciate that Washington State Parks has a number of project priorities across the state, but also recognize that due to the statewide interest in this Trail, the time is now to prioritize investments to get the ball rolling for the long-term development and use of this unique trail of statewide significance. Washington Bikes and Washington Trails offer our continued support and assistance in helping State Parks achieve success around the state for recreation and trails.

This article was posted in Advocacy, Issues & Advocacy, Trails and tagged John Wayne Pioneer Trail, trails. Bookmark the permalink. Follow comments with the RSS feed for this post. Both comments and trackbacks are closed.