Talk to any bicyclist who has traveled the Olympic Discovery Trail route between Port Townsend and US Hwy 101, and you’ll hear shivering tales about the 6-mile segment that follows SR 20. Sharing the winding, narrow two-lane highway with logging trucks, RVs and other vehicles can render even the most seasoned cyclist weak in the knees.

We were pleased to learn that, in November, the Jefferson County Commissioners voted unanimously to authorize a feasibility study to establish the route for the ODT-Eaglemount Trail. This segment will connect Port Townsend’s Larry Scott Memorial Trail via Discovery Road to Hwy 101 at the head of Discovery Bay, making it possible for trail users to bypass SR 20. The authorization was performed by way of adding the study project to the County’s Transportation Improvement Plan (TIP).

From the Peninsula Trails Coalition: 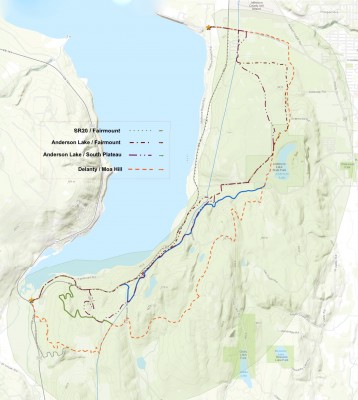 The Olympic Discovery Trail will ultimately be a 126 mile multipurpose non-motorized trail running from Port Townsend to the Pacific, via Discovery Bay Village, Gardiner, Blyn, Sequim and Port Angeles. About 70 miles of the ODT have been built, and another large section on the north side of Lake Crescent is nearing completion. The six-mile Eaglemount section is the longest section of the trail that has not yet been planned – largely because of daunting topographical challenges.

In September Sergeant John Ryan of the Washington State Patrol, Port Angeles Detachment, wrote to Jefferson County: “My troopers regularly patrol SR 20 often observing cars, logging trucks, loaded chip trucks, motorhomes, trucks with trailers, etc, trying to navigate SR20 over Eaglemount while dealing with bicyclers and hikers and oncoming traffic. I myself was assigned to Jefferson County from 1999 to 2003 and patrolled SR 20 often so I know firsthand how dangerous it is. For the safety of everyone—both motorists and non-motorists—we encourage inclusion of a feasibility study of a recreational trail alternative in the County’s TIP.”

The Olympic Discovery Trail shares the Eaglemount route section of the trail with the federal Pacific Northwest National Scenic Trail – the newest part of the National Scenic Trails network. The PNNST was established in 2009 as a result of legislation sponsored by Representative Norm Dicks and Senator Maria Cantwell. Former Representative Dicks, now in private practice, has been working with state and federal officials, including U.S. Representative Dale Kilmer, State Representative Steve Tharinger, the Washington State Department of Transportation and the Washington State Department of Natural Resources to support Jefferson County in planning, and ultimately building, the trail. “PNT hikers, bicyclists, mobility impaired persons, bike-touring groups, and motorists will all be safer, healthier and happier with a trail bypassing SR-20. And a completed world-class ODT should be great for the economy,” Dicks said.

Jeff Selby, vice-president of the Peninsula Trails Coalition, says that the next step is to fund the study, which his organization hopes to accomplish soon, with the object of completing the study within the next four months so that grant funding for construction of first section(s) of the trail can perhaps be applied for in May, 2016. “The schedule is tight, but now that this crucial first step has been taken by Commissioners Johnson, Kler and Sullivan we can move ahead – after working toward this for 25 years,” Selby said. “Everyone should thank the Commissioners, the County Administrator, and the County’s Public Works Department for what they have done.”

For more information about the Olympic Discovery Trail, visit olympicdiscoverytrail.com.

This article was posted in News, Trails and tagged Jefferson County, Larry Scott Memorial Trail, Olympic Discovery Trail, Port Townsend, trails. Bookmark the permalink. Follow comments with the RSS feed for this post. Both comments and trackbacks are closed.