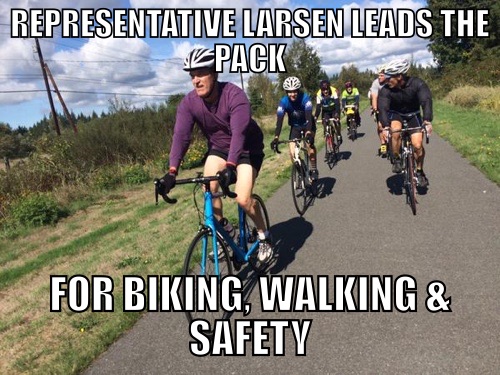 Fixing America’s Surface Transportation (FAST) Act is the first long-term reauthorization since 2005. It follows 2012’s 2-year reauthorization, MAP-21 (and several short-term stopgap extensions), which produced a number of not-so-great changes for biking and walking investments. Luckily, the FAST Act does little-to-no harm and in fact makes some notable improvements, including:

These top-line increases represent progress for biking and walking on the federal level. And while many helped make this progress a reality, the outsized role that Washington state’s Representative Rick Larsen has played is again notable. In September Washington Bikes reported Representative Larsen’s leadership in sending a letter from all US House of Representatives Democrats on the Transportation and Infrastructure Committee requesting funding to continue for the Transportation Alternatives Program. Since then, he served on the conference committee to negotiate the final agreement between the House and Senate. The results speak for themselves.

More details on this item are included on the League of American Bicyclists’ blog post about the FAST Act.

Also of note in the FAST Act, is an innovative improvement to the Transportation Infrastructure Finance and Innovation Act (TIFIA) program that provides Federal credit assistance in the form of direct loans, loan guarantees, and standby lines of credit to finance surface transportation projects. Previously, only projects greater than $50 million were eligible for these loans. Now, thanks to an amendment offered by Representative Rick Larsen, projects greater than $10 million are now eligible.

The result? With a lower project cost threshold significant regional trails and access projects for biking and walking now are eligible to new low-cost financing options. As more and more communities see the importance of building active transportation connections, the new TIFIA provision could give bike “mega projects” a jump start. For more details on this exciting amendment sponsored by Representative Larsen, check out the Rails to Trails Conservancy’s recap of the FAST Act.

Despite this, there’s a lot more work to do. Federal funding for biking and walking continues to fall short in comparison to how much people bike and walk. It’s especially low compared to the disproportionate number of serious injuries and deaths that those biking and walking experience. Sustainable funding for transportation on the federal level is still broken as motor vehicles do not pay for the roads they use. Improvements in measuring non-motorized safety performance measures by USDOT are still necessary. Also, additional work to focus transportation solutions for biking and walking at the state and federal levels remain works in progress.

This article was posted in Federal, Funding/Policy, Infrastructure, Issues & Advocacy, Politics, Safe Routes to School, Trails, Transportation and tagged federal transportation, Rick Larsen. Bookmark the permalink. Follow comments with the RSS feed for this post. Both comments and trackbacks are closed.