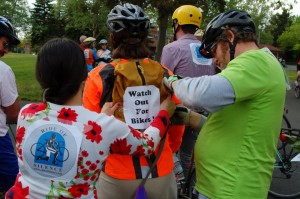 The black armbands tell you: This is a somber procession.

The bicycles tell you: This is because we need safer streets.

The national statistics tell you: The U.S. has a cyclist injury rate twenty times that of Denmark and The Netherlands and seven times Germany’s.

The worldwide map tells you: All around the globe, on this day, people are riding together in silence because we need to draw attention to the collisions, the injuries the deaths.

The petition* tells your legislators: A state investment in safer bicycling and walking connections saves lives.  (Sign it at the bottom of this page.)

The Ride of Silence tells everyone: We ride in silence to speak up for safety.

Tonight in towns around Washington state, people who care about safer streets are participating in a global event. The Ride of Silence honors those who have been injured or killed while bicycling on public roads and highways. Chris Phelan of Dallas founded the event in honor of his friend Larry Schwartz, struck and killed by the side mirror on a bus, to raise awareness of people on bicycles and to ask that we all watch out for each other.

At WA Bikes we work tirelessly on safety issues and funding for better infrastructure so families won’t have to suffer the loss of a mother, father, sister, brother, grandma or grandpa, aunt or uncle, friend or teacher. The Ride of Silence reminds us how much more we have to do.

Several communities around Washington organize local rides. If we missed your ride on this list, add it in the comments below with details. (Next year, add your event to the Ride of Silence list for Washington and put it on our statewide events calendar to help spread the word.)

If you want to organize a Ride of Silence for your community, the site has an organizer’s checklist, sample materials such as a news release and ROS logo, and other resources. If you plan to organize one in Washington for 2016, let us know and we’ll help spread the word next year.

“How about if we all just try to follow these very simple Rules of the Road? Drive like the person ahead on the bike is your son/daughter. Ride like the cars are ambulances carrying your loved ones to the emergency room. This should cover everything, unless you are a complete sociopath.”
— Letter to VeloNews from David Desautels, Fort Bragg, California

The Ride of Silence poem is read aloud at the beginning of the ride:

The Ride of Silence…

Tonight we number many but ride as one
In honor of those not with us, friends, mothers, fathers, sisters, sons
With helmets on tight and heads down low,
We ride in silence, cautious and slow
The wheels start spinning in the lead pack
But tonight we ride and no one attacks
The dark sunglasses cover our tears
Remembering those we held so dear
Tonight’s ride is to make others aware
The road is there for all to share
To those not with us or by our side,
May God be your partner on your final ride 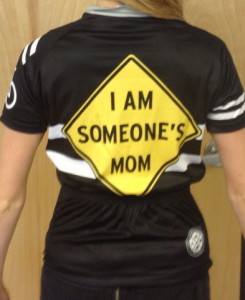 *Petition: We call on Gov. Inslee and the Washington state legislature to make safer bicycling a top priority and to invest in more bike lanes and trails to create a complete network of bicycle connections.

This article was posted in Advocacy, News, Safety, Seattle, Spokane, Vancouver. Bookmark the permalink. Follow comments with the RSS feed for this post. Both comments and trackbacks are closed.