WAbikes in Olympia: 5 things to watch in week 5

Exactly 30 days into session, here are five things Washington Bikes is watching as the second half of the Washington state legislature’s 2014 session begins:

#1 – Supplemental Transportation Budget: Supporting Mobility and Safety. Now with the policy bill cutoff behind us, discussions are transitioning into addressing the supplemental budgets for the 2013-15 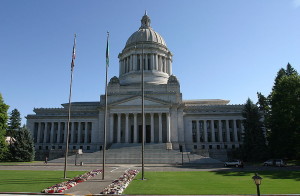 biennium. With approximately $30.45 million, the 2013-15 transportation budget represented the best budget ever for the Safe Routes to School and Bicycle and Pedestrian state grant programs. Unfortunately, due to federal funding uncertainty (2014 represents the end of the federal transportation reauthorization, MAP-21) and state funding ties to these grant programs expiring, only $8 million in state funds is programmed for the 2015-17 biennium for both grant programs.

A supplemental budget for the 2013-15 biennium (essentially, a budget that corrects for changing forecasts, and adjustments in policy priorities halfway through the two-year budget) represents a first step in bridging the significant drop in funding for these two grant programs that provide education and training to over 10,000 kids every year, improvements in tens of schools and neighborhoods, and critical trail connections that improve accessibility and safety statewide.

#3 – HB 2123: Adding Congestion Relief to the State Mobility Goal. This legislation takes a clear state transportation mobility system goal and adds unnecessary specificity that could actually skew how state spending is directed at the 99.2% of congestion that occurs in the Puget Sound region. It passed out of committee with concerns from a number of Washington Bikes’ legislative champions. For more about the specifics of the legislation, Sightline Institute authored an informative blog post on the legislation.

#4 – State Transportation Revenue Package. The statewide revenue package conversation slowly continues. Now it appears an MCC Senate proposal will be released next week – over halfway through the session. Even with a package proposal, it has been suggested that any action could be delayed until a special session following the November 2014 elections.

#5 – Transportation Advocacy Day on February 27. With transportation project cost overruns looming, increasing uncertainty about how to fix our bridges and roads, and a growing need to invest in biking and walking statewide, the state legislature needs to hear from YOU.

Join us for Transportation Advocacy Day on Thursday, February 27 to tell Olympia Washington Bikes. This is your chance to let your elected representatives know that Washingtonians want priorities that:

The day-long event in Olympia connects you with others who share your transportation priorities for better biking. Be a part of the solution and serve as a citizen lobbyist for the day.

This article was posted in Advocacy, Funding/Policy, Infrastructure, Issues & Advocacy, Legislature, News, Safe Routes to School, Safety, Transportation, WSDOT. Bookmark the permalink. Follow comments with the RSS feed for this post. Both comments and trackbacks are closed.