In India, the Bicycle Rises Above the Din

Earlier this year I took a much-anticipated trip to India, a place I’d never visited but dreamed of experiencing since seeing the film Passage to India in college. I boarded Air India with seven other friends and flew from New York’s JFK International to New Delhi where for the next 12 days we explored a region called the Golden Triangle, a popular tourist route that encompasses the bustling capital of New Delhi, Agra (home to the Taj Mahal), and Jaipur, also known as the Pink City and famous for its majestic forts, palaces, and arts and crafts.

We arrived in Delhi on Feb 20. Our tour guide Praveen welcomed us at the airport with marigold leis he placed around our necks with great ceremony. The sun shone bright as we emerged into a balmy and surprisingly arid eighty-degree day . We’d chosen to visit in February to avoid the monsoon season and paralyzing humidity that begins in April. My friends and I hoped the weather and our exotic surroundings would provide the antidote to our winter blues.

Our first day touring Embassy Row we were greeted by a dozen curious monkeys parading onto the village green. The expected sacred cows dotted the side of the road as we further ventured from the city center into more rural landscapes. So did sleeping dogs, the mongrels stretched out so close to the side of the road I feared the mutts would get run over by the never-ending traffic careening every which way. 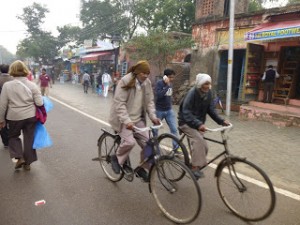 Outside the Taj Mahal, India on Wheels

On our Friendly Planet tour bus I watched from high above the myriad modes of transport people use to travel the roads of northern India. Rickshaws, mopeds and motor bikes, cars, buses and trucks all vie for a piece of the  narrow four– sometimes two–lane road. To further complicate traffic conditions  there are also people walking and biking on the same road all the other vehicles use, along with the aforementioned sacred cows and sleeping dogs along the perimeter.

Here in Seattle I bike for pleasure, to do small errands, and in the warmer months I enjoy commuting back and forth to my job at Washington Bikes.  I will carry a change of clothes, my lunch, and books and papers in my pannier. When I rode down the coast of California and up the western coast of Ireland I loaded a tent and sleeping bag on my bike rack along with the requisite food, clothes, and maps necessary for my journey stuffed in my panniers. 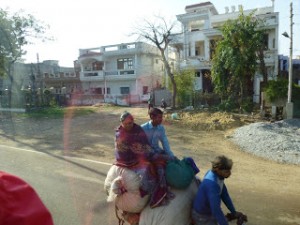 Carrying a Load Plus, Uttar Pradesh

What amazed me about people cycling in India is the vast array of ways they chose to use a bicycle. I saw a man hauling a large load wrapped in burlap on the back of his bike. On top of the load sat a man and woman, who looked as if all their earthly possessions rode underneath them.

Another bike rider carried lumber boards and building materials on a slat with wheels attached to the back of a bicycle. One gentleman hauled gasoline cans. And a third pulled a platform of rugs behind his bike.

Amidst the honking of cars and careening of people and beasts along the side of the road I wondered how traffic moved at all.  But it does. The beeping horns are not to irritate or aggravate, but offer a reminder someone is passing or taking a piece of the road. 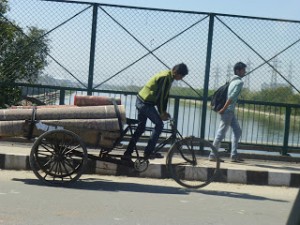 Hauling a load of carpets, Delhi

Of course there are also people riding bikes to get from one place to the next without any hauling or exchange of commerce. Sitting in my motorized Friendly Planet bus with a bird’s eye view of the crowd I often yearned to get closer to the ground. On the third day of our trip my wish came true. We toured Jama Masjid, India’s largest mosque completed in 1656, and then embarked on a bicycle rickshaw ride in a bustling New Delhi marketplace.

The rickshaw driver veered through a narrow lane of bustling shops selling jewelry, silver, electronics, textiles, and clothing. A rat’s nest of wire hung from above like a jumbled electric cloud, one spark away from a conflagration. Walkers, fellow rickshaw drivers, motorbikes, shopkeepers, and their customers shared this busy public space. The closeness of people forced to interact with one another and share the road brought a big smile to my face.

Here at Washington Bikes, I oversee the building of membership, connect people who want to do good with opportunities to grow bicycling, and market and promote the Share the Road license plate and philosophy. 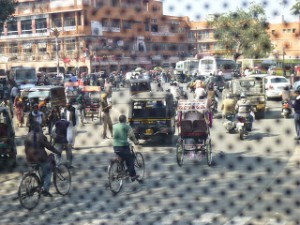 Through the Back Window of the Bus, Jaipur

Across the world in India I learned first hand the intimate flowering of shared space, how people incorporate bicycling into their daily work lives, and how the bicycle continues to flourish in a rapidly industrializing society that is poised to grow and prosper in this new twenty-first century.

Whether in Seattle or New Delhi, I learned that the bicycle is still relevant.

This article was posted in Adventure, Travel. Bookmark the permalink. Follow comments with the RSS feed for this post. Both comments and trackbacks are closed.