Photographs by the author except as noted 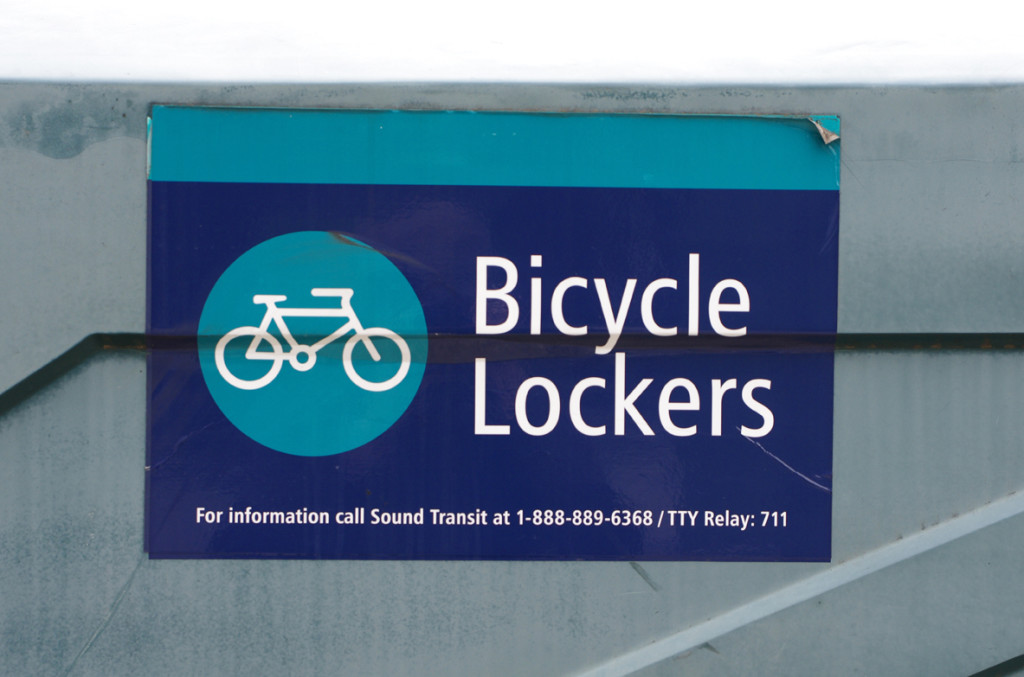 On Wednesday May 22, 2013 I joined a Sound Transit (ST) tour of the Sumner and Puyallup Sounder stations. The tour was organized by ST staff and included members of their Bicycle Advisory Group. Arnie Tomac, former BAW board president and member of the Redmond Pedestrian and Bicycle Advisory Committee joined this tour and I had the good fortune to sit next to him and chat on the ride home. This post is a follow-up on a post that I wrote earlier about two Link light rail stations that will be retrofitted with additional bicycle parking and is meant to describe the additional bike parking planned at two Sounder stations.

The tour departed Seattle’s Pioneer Square neighborhood in the early afternoon and returned in the early evening. The trip involved two ST Express bus rides and the final leg of the trip was on Sounder commuter train. While I had previously traveled on Link light rail, this was my first trip on Sounder which I found to be quite pleasant. Sounder is a commuter rail line that operates between Lakewood and Everett on weekdays during peak commute times. Sounder is operated on behalf of Sound Transit by Amtrak using rail owned by the Burlington Northern Santa Fe Railroad (BNSF). Sounder and Link systems form the backbones of the regional passenger rail system. Currently Link light rail operates all day from downtown Seattle to the SeaTac airport. ST has multiple system expansions underway for both the Sounder and Link and will reach the University District, Northgate, Bellevue and many more communities.

Shortly after we got off the bus in Sumner, Mayor Dave Enslow rolled up on his bicycle. 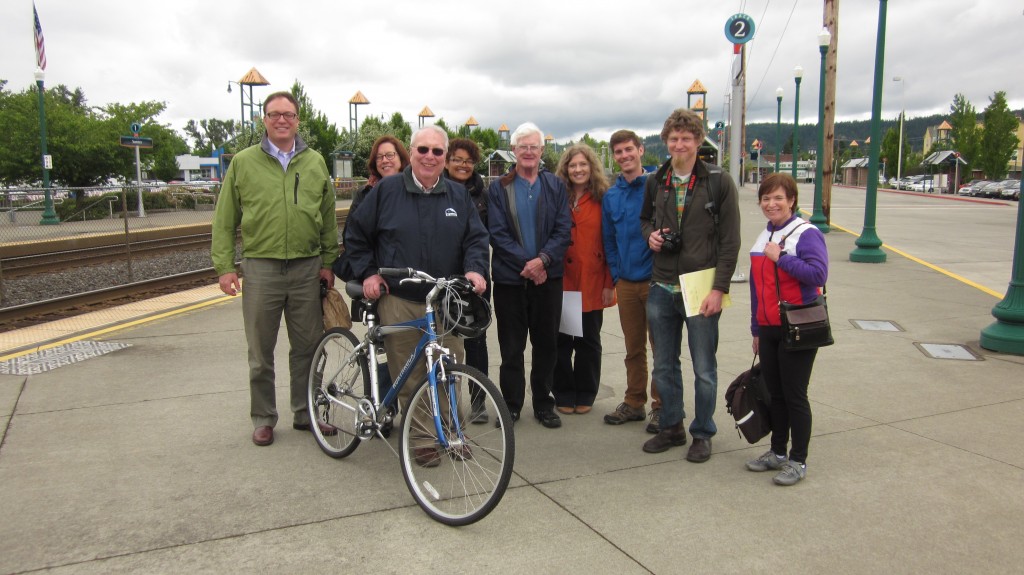 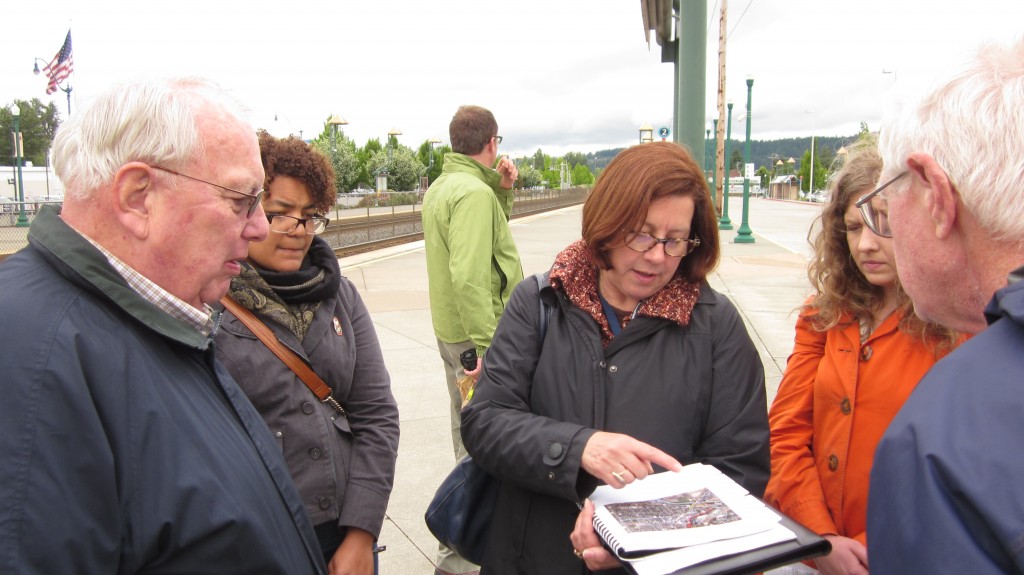 At the Sumner station there is an existing CCTV system in the proposed bike locker area. There are seven existing lockers (each locker has two units so in total they can hold 14 bikes) and two bike racks  which nominally hold eight bikes each, though in actual use the capacity is typically lower than that. The proposed upgrades include 19-22 lockers total (holding 38-44 bikes) and as many bike racks as possible—which is yet to be determined. 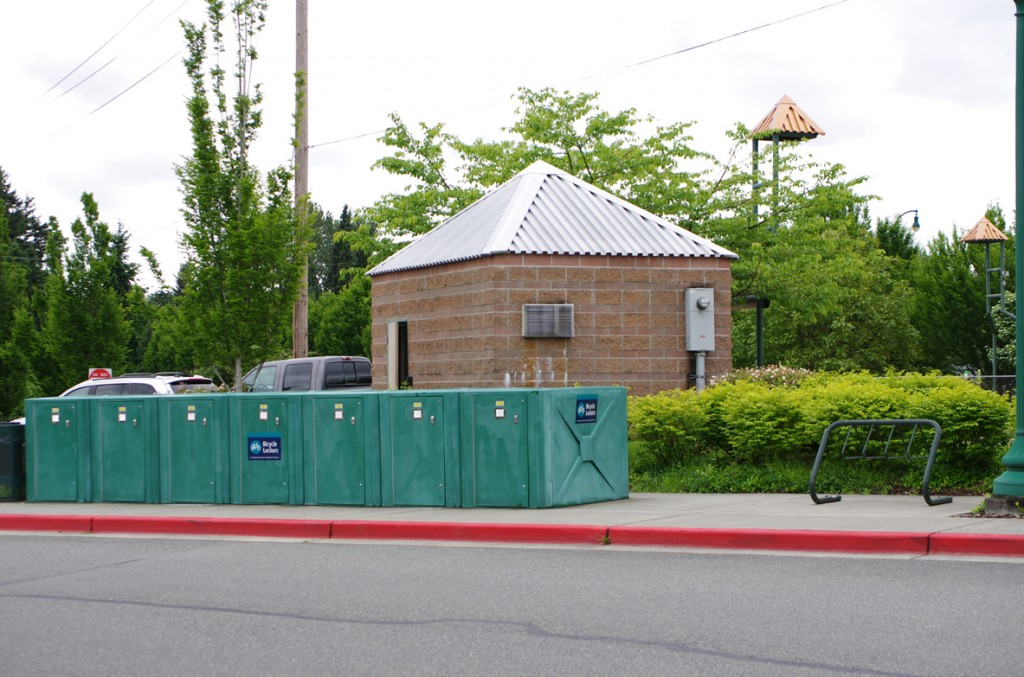 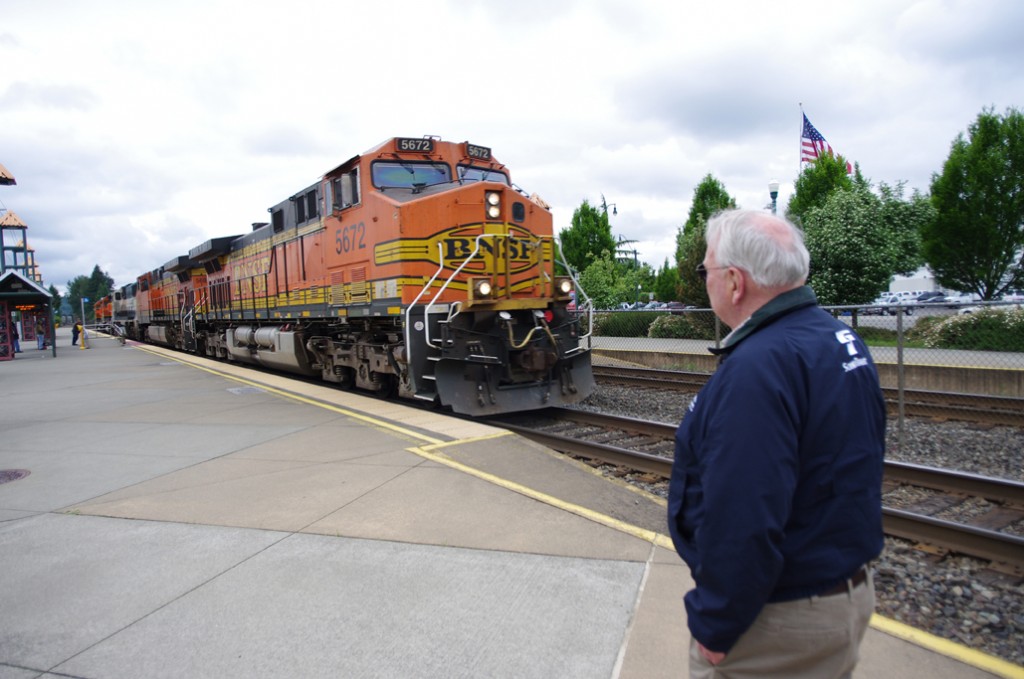 The tour group then caught a bus to the Puyallup Sounder station where we had a similar briefing on the existing and proposed bicycle parking facilities. 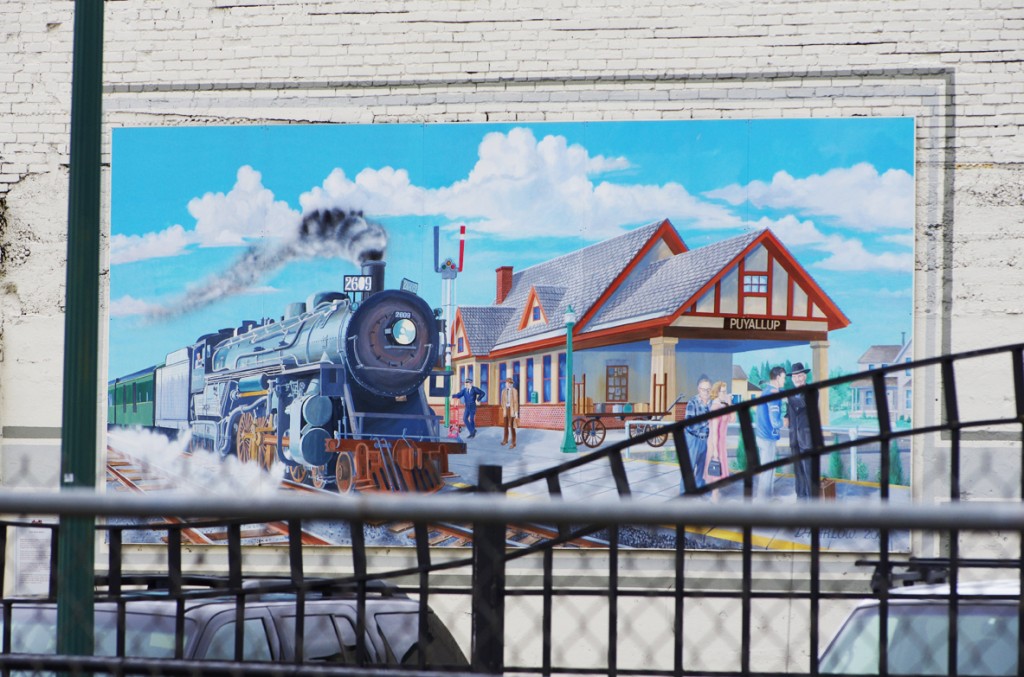 Mural at the Puyallup station

While the mayor of Puyallup did not come out to welcome us, the station agent was engaging and talked with us about the popularity of biking to the rail station. He said that the bike racks were very often used to full capacity at the Puyallup station. 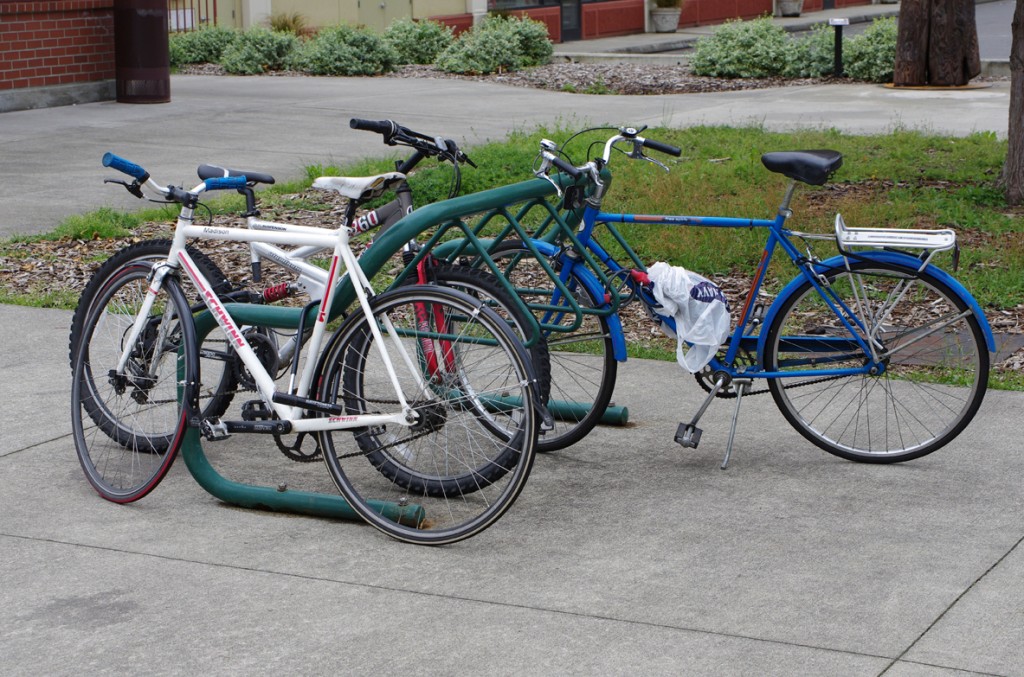 A partially occupied bike rack at the Puyallup station

At the Puyallup station there is no existing CCTV system in the proposed bike locker area and no current plans to add one due to the difficulty of retrofitting one. Existing facilities include nine lockers and one bike rack which hold eighteen bikes and eight bikes respectively. There had been ten lockers, but one was removed because it was in poor condition. 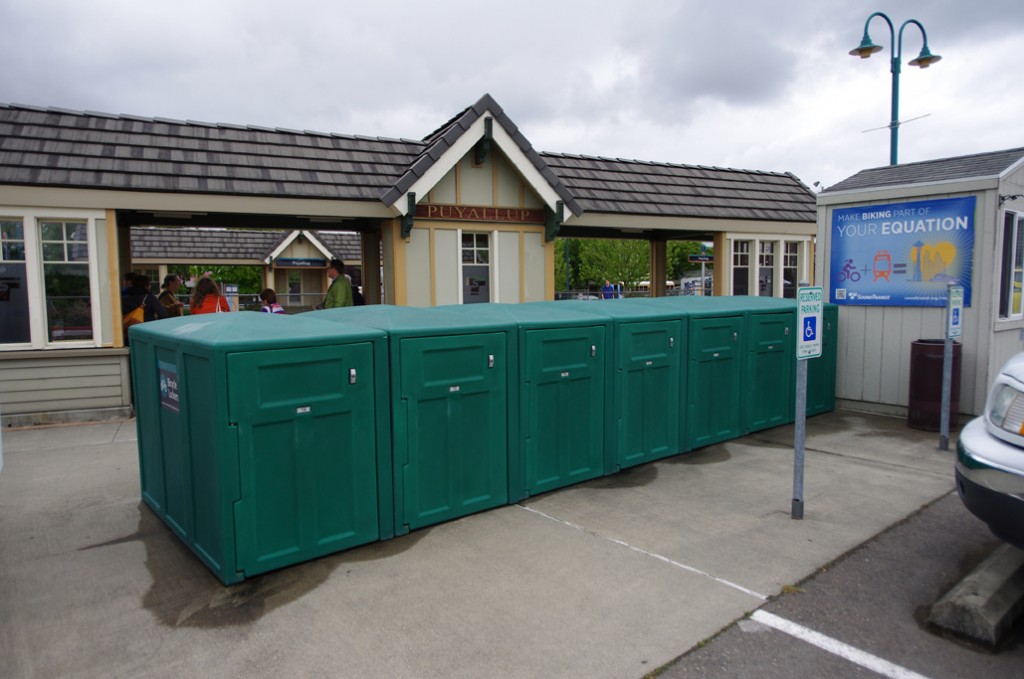 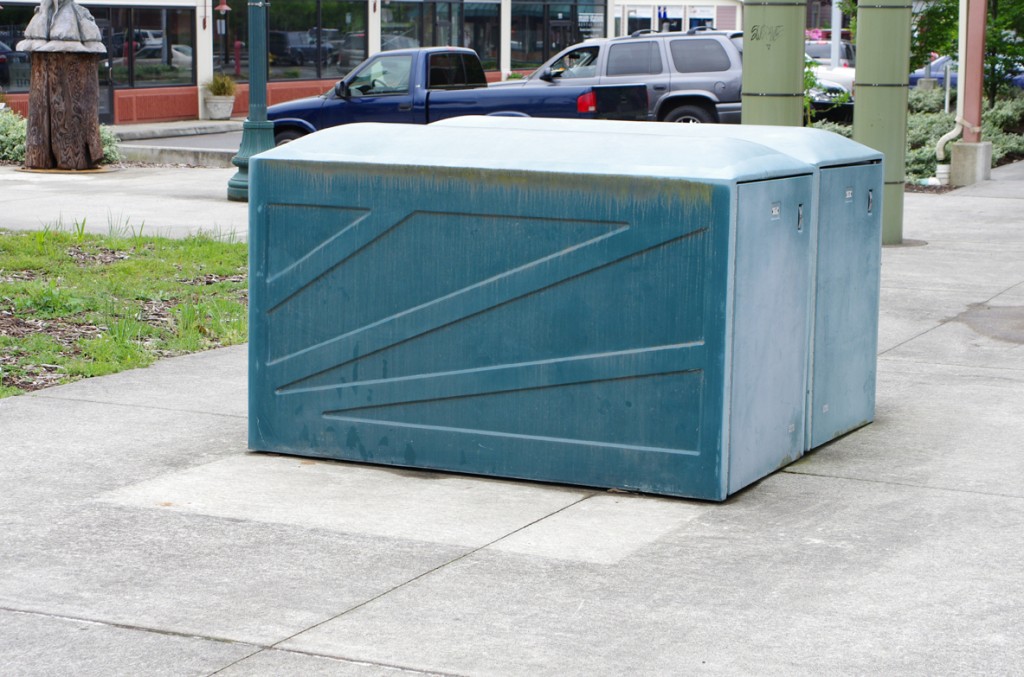 The proposal for expanded bike parking includes seventeen lockers total and additional bike racks.  Most likely there will be total of three bike racks with a capacity of up to 24 bikes. Once the designs are approved we can publicize the proposed new site plans for these two stations. Future Sound Transit facilities will include bike parking which will be integrated with the station area designs so there will be no need to retrofit bike parking.

Sound Transit requires all future ST Link facilities to provide bike lockers or a bike cage; and many planned facilities provide both. The Tukwila Sounder station is slated to get a bike cage and the Mukilteo Sounder station will have bike lockers.  After Mukilteo and Tukwila stations are finished the Sounder commute rail will be complete, but Link light rail will continue to expand. All other future facilities not currently under construction will include cages, lockers and racks.

In addition to bicycle parking at the stations, ST has done a good job of encouraging all types of multi-modal trips by allowing bicycles onto the train. This allows commuters to easily use their bicycle between home and their home station and between their work station and workplace. At Washington Bikes we encourage the promotion of multimodal travel as a way to increase mobility and decrease the negative impacts of travel; we support improvements in bicycle parking facilities at transit stations as well as improvements to on-board bike capacity. Bikes and transit are very complementary modes of transportation, and as I pointed out in my earlier post , together they have great potential for alleviating many of our transportation challenges.

This article was posted in Accessibility, Bike Parking, Bike to Work, Commuting, Infrastructure, News, Seattle, Tacoma, Transit, Transportation. Bookmark the permalink. Follow comments with the RSS feed for this post. Both comments and trackbacks are closed.