2012 brought its ups and downs for investments in Safe Routes to School – an oversubscribed state grant program that increases physical activity by getting kids walking and biking, improves safety and reduces vehicle citations, and improves concentration in academics.

First, the additive fee bill passed in the legislature and signed by the governor in spring 2012 brought a much-needed influx of state investments for the growing Safe Routes to School program. We say “additive” because the goal of the bill was to increase investments above and beyond where they were with federal and state funding. 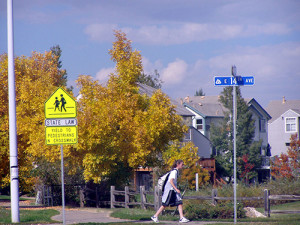 Unfortunately, the progress forward in Safe Routes to School threatened to disappear just months later with the passage of the two-year federal transportation bill. Moving Ahead for Progress in the 21st Century (MAP-21) diminished direct federal funding for walking and biking by at least 35%. With hard work and full-on campaigning, Washington Bikes with help from our friends at the Transportation for Washington Campaign worked to restore funding to the 2009-11 biennium levels for federal funding in Safe Routes.

State budgets have to be based on some assumptions about the level of federal money coming in. But unfortunately, the next two years of federal funding for Safe Routes to School will still fall short of the dollars assumed as a base for Safe Routes when the state legislature made its additive fee bill investments last spring.

That’s where Senate Bill 5506 comes in. This bill seeks to provide certainty by ensuring that the level of federal funds dedicated to Safe Routes to School grants will remain the same as the last two years by establishing a floor of federal funding. Under MAP-21 the state has flexibility in redirecting some of its funds to make this possible. This week SB 5506 needs your help to get voted out of the Senate Transportation Committee. Our friends at the Childhood Obesity Prevention Coalition have an action alert ready to go.

SB 5506, sponsored by Senator Andy Billig (Spokane), helps guarantee that we continue to grow investments that already show results. Seventy percent of the Safe Routes to School projects in Washington state that were awarded between 2005 and 2009 have been completed. At schools with completed projects, the number of children biking and walking has increased by over 20 percent.

By drawing partially from the Highway Safety Improvement Program (HSIP), SB 5506 continues to make the explicit linkage between child safety and roadway safety as 14% of all serious injuries and deaths in Washington occur when walking or biking and yet HSIP funds currently expend less than 1% to fix this problem. Similarly, walking on Washington state streets constitutes the third leading cause of death for our kids.

Making the link explicit between highway safety and walking and biking is a priority of Washington Bikes. With our work on MAP-21, we’re carrying it on in supporting SB 5506, working on the update of Target Zero (the Washington state strategic highway safety plan), and by working with our legislators and WSDOT.

Here at Washington Bikes, we’re proud to advocate and grow the linkage between road safety investments and getting kids to walk and bike. Next week we’ll be sharing it with advocates across the country at the National Bike Summit in Washington D.C.

Back here in the other Washington, we’ve got work to do this week. Please visit the Childhood Obesity Prevention Coalition’s action alert, send it out, and let the Senate Transportation Committee know about the great reasons to vote YES on SB 5506.