By baw_admin | Published March 27, 2012
Calling on all recreational riders, cycling tourists, randonneuers, trail advocates and anyone who bikes on the Kitsap or Olympic Peninsulas! 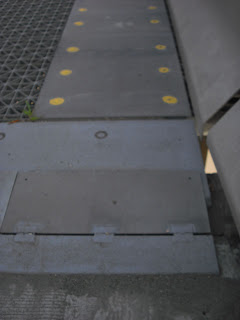 Please send a letter to Secretary of Transportation Paula Hammond to request additional funding for the Hood Canal Bridge to make it SAFE for all users including bicyclists!

When the Hood Canal Bridge reopened in the summer of 2009, bicyclists from Squeaky Wheels, West Sound Cycling Club, and the Port Townsend Bicycle Association immediately identified serious safety issues with the bridge: the width and surface treatment of the plates placed over the metal grating, and gaps, joints and height variations betweeen the bridge sections.  Those same cyclists notified and met with WSDOT representatives. In the first few months that the bridge was opened, several cyclists were seriously injuried.

As executive director of the Bicycle Alliance, I started working in early 2010 with those same bicycle advocates and we successfully allied with WSDOT to acquire $1.3 million to address the safety concerns identified. WSDOT then met with those organizations to discuss design proposals and material selection with the stated goal to retrofit the bridge during the 2012 construction season.

Unfortunately, according the WSDOT project engineer, the various options under consideration will likely exceed the $1.3 million allocated for this project. Instead the cost appears more likely in the $1.8 million range. WSDOT continues to “evaluate the options with WSDOT bridge designers and the evaluation has not changed” meaning this project needs more money to create a safe riding surface for bicyclists.

Because of WSDOT’s concern over the increased cost of the project and the uncertainty over the additional funding needed, design work on the project has stopped and will not resume until such time the project engineer is advised that more funding is available to complete this project.

As process requires, a project summary was submitted to the WSDOT Program Management group that oversees funding issues, and “requested guidance on the funding piece.” ASK Secretary Hammond to please make a determination that additional funding is warranted to fix the safety issues that were identified back in the summer of 2009.

Now is the time for WSDOT to fund the Hood Canal Bridge’s safety issues for bicycles before more cyclists are injured. Ask Secretary Hammond to:

This article was posted in Advocacy, Alert, Bike Clubs, Kitsap County, Olympic Peninsula, Safety, Transportation, WSDOT. Bookmark the permalink. Follow comments with the RSS feed for this post. Both comments and trackbacks are closed.