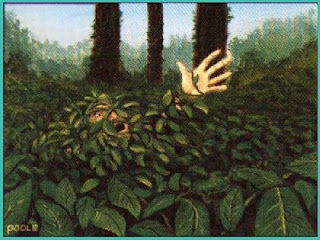 Everyone who’s been to the American South is familiar with kudzu—a creeping plant that appears unbidden, soon covers everything in sight, and serves no useful ecological function

Sort of like stop signs on America’s multi-use bike-pedestrian paths.
This is not a post about how it’s OK for cyclists to run stop signs. And it’s certainly not a rant against stop signs generally. Properly located, they serve a very useful purpose. But in highway engineering as in other aspects of life, too much of a good thing can become a bad thing. And so it is with the stop sign.
In particular, I’m talking about trail builders’ penchant for placing stop signs that purport to require bicycle-pedestrian trail users to come to a halt at every crossing, large or small, significant or not. Certainly it’s annoying. But more importantly, it creates ambiguities about who has the right of way, sows the seeds of confusion for motorists and trail users, and can be downright dangerous. 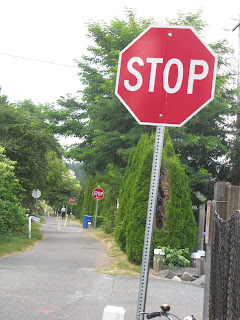 What’s more, forcing cyclists to yield the right of way at every crossing violates even America’s auto-centric road engineering standards, and goes against Washington’s traffic laws.
Let’s start with those laws.  Be forewarned, however: Trying to reconcile the Washington statutes that govern right of way where bike-pedestrian trails cross streets may leave you chasing your legal tail. As the Washington Supreme Court once observed, with considerable understatement, “…our state’s laws on bicycles and traffic safety do not present a picture of clarity…”
To begin with, the law considers bicycles to be “vehicles” (RCW 46.04.670), and bicyclists riding on a “roadway” generally have the same rights and responsibilities as car drivers (RCW 46.61.755(1)). Among other things, any “vehicle” that comes to a stop sign must stop and yield to cross traffic (RCW 46.61.190(2)).
So doesn’t that mean that cyclists facing stop signs on a bike-pedestrian path must stop and yield, just as they would as if they were riding on a regular street? Well, not really.
That’s because of at least two other legal provisions. First, the law requires cars approaching any crosswalk to yield to both pedestrians and bicyclists who are in the crosswalk (RCW 46.61.235). Second, there’s a provision that exempts bicyclists from parts of the Vehicle Code “which by their provisions can have no application [to bicycles].” (RCW 46.61.755(1)).  If cars have to stop and yield to cyclists in a crosswalk, then how can the stop-and-yield requirement apply to the cyclists as well? That would leave everybody and nobody with the right of way.
You also have to go back and ask the question whether a bike-pedestrian path fits within the definition of a “roadway” to begin with, triggering the requirement that cyclists act like car drivers.  In a 1990 case involving a cyclist who was injured in a crosswalk along a King County cycle path, our State’s Supreme Court said no. In that case, which was decided before the legislature changed the law to explicitly require cars to stop for cyclists in a crosswalk, the Court also observed that having different right-of-way rules for pedestrians and cyclists in a crosswalk made no sense.
So what are all those bike-trail stop signs still doing there, anyway? And if a stop sign on a bike trail doesn’t mean what it would if it were placed on a roadway, what—if anything—does it mean? My suspicion is: probably nothing. But no court has ever explicitly said that, although the 1990 Supreme Court case came pretty close.
I doubt that many trail or road users are aware of these legal intricacies, or of the disconnect between the law and the signs. But they must feel the bewilderment in their bones, since the situation on the ground is generally one of mass confusion. Some cyclists, oblivious to their own safety, just blast through the stop signs. Some cyclists prepare to yield to cars, only to have the cars stop for them. Some drivers yield at bike-pedestrian trail crossings regardless of who has the stop sign; others just roar through even if a pedestrian’s in the crosswalk. The end result is danger, since nobody’s sure who’s going to do what.

Aside from the legal confusion these stops signs create, their overabundance of along bike-pedestrian trails violates accepted highway-engineering standards. 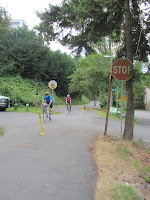 Traffic engineers know that if you put too many stop signs where they don’t belong, people—both drivers and cyclists–will start ignoring them.  In fact, the American Association of State Highway and Transportation Officials says that it’s a “misconception” to think that peppering bike trails with stop signs is a good way to reduce crashes. Thus, the national engineering standards that govern such things urge local officials to go easy on the stop signs on bike-pedestrian trails.
The 2009 edition of the Uniform Manual of Traffic Control Devices (the engineers’ bible for such things) says that:  “Speed should not be the sole factor used to determine priority, as it is sometimes appropriate to give priority to a high-volume shared-use path crossing a low-volume street, or to a regional shared-use path crossing a minor collector street.”
The draft American guidelines for cycling facility design say that “ installing unwarranted or unrealistically restrictive controls on path approaches in an attempt to ‘protect’ path users can lead to disregard of controls and intersection operating patterns that are routinely different than indicated by the controls. This can increase an unfamiliar driver’s risk of collision, and potentially lead to a loss of respect for the [traffic] control…”
So stop signs on bike-pedestrian paths are legally dodgy and can be dangerous. What should be done? Here are a few modest proposals:
–Remove the stop signs.  This one seems obvious.
–Place signs at trail crossings explicitly telling motorists that they must yield to all trail users.
–Amend the law to make it crystal clear that cyclists on bike trails are not subject to the same rules as they are on a roadway.
–Place “speed humps” at trail crossings to make sure that cars slow down. In the Netherlands, where cyclists almost always have the right of way, it’s common to raise bike trails slightly at road crossings, so that the crosswalk itself is a speed hump. These “raised crosswalks” are starting to appear in America as well. They should be a standard design at all trail crossings that don’t have traffic signals.
–Place traffic signals at trail crossings on busier roads.  That way everybody gets a turn.
–On the busiest crossings, consider bike overpasses, also a common feature on bike trails in the Netherlands, as this video demonstrates. Grade separation is the ultimate safety accessory.
Of course, some will object to what they see as giving cyclists the advantage over “real” transportation.  But the Vehicle Code already gives cyclists the right-of-way in crosswalks, and the signs should be consistent with the law. Moreover the present situation is confusing and dangerous, not only for cyclists but for pedestrians as well.  And the bicycle will never become a viable transportation option for most Americans until those who design bike infrastructure start treating it like one.
·

This article was posted in Attitudes, Infrastructure, Issues & Advocacy, Safety, Transportation. Bookmark the permalink. Follow comments with the RSS feed for this post. Both comments and trackbacks are closed.