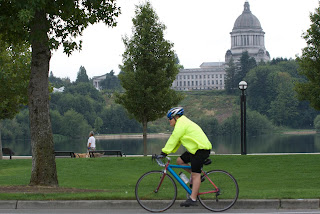 A big part of Washington Bikes’s mission is working in the State Legislature to make Washington state even more bike-friendly. Washington has been named the “most bike friendly state” three years in a row (the only state to ever be #1) by the League of American Bicyclists, but we all know there is more to be done to make our communities welcoming to everyone who might ride.

On June 12th, the Bicycle Alliance Legislative and Statewide Issues Committee met to set our priorities for the 2011 Legislative Session for recommendation to the full board. Committee members represent bike clubs and interests from around the state. We had at least nine counties and almost as many bike clubs represented. Many views and interests were expressed, but we came to agreement around:

Mutual Courtesy and Safe Passing Act. This bill would enhance the existing requirement for drivers to pass bicyclists safely and include other needed clarifications on bike-car interactions.

Authorizing lower speed limits. By allowing cities and counties to adopt lower speed limits it would decrease bicyclist and pedestrian injuries and fatalities. Currently, lower limits can only be specified for school and construction zones.

Directional signs and bike maps are considered advisory. Motivated by Pierce County saying they’ll no longer publish a bike map due to a lawsuit by a cyclist injured while following a route, we want to protect both cyclists and the expansion cycling information and visibility.

Complete Streets grant program. Jurisdictions that have complete streets policies would be eligible to apply for state grant funding for implementation. This bill is another carryover from 2010, an effort led by Washington Bikes and Transportation Choices Coalition, among others.

Vulnerable Users. This would create an enhanced penalty if a pedestrian or cyclist (or other vulnerable roadway users) are killed or seriously injured by a motorist who violates a traffic law (such as failing to yield the right of way or speeding). Cascade Bicycle Club is the lead on this effort, and we are already working again to support it.

We’ll be keeping an eye out on the Safe Routes to School program making sure the community demand for grants and safe places to walk and bike is considered and that hopefully funding is increased when budgets and bills are written. The Bicycle Alliance will also work with other stakeholders to revise the Cost-Benefit law for transportation investments and a transportation funding package with significant investment in alternative transportation modes.

The Bicycle Alliance has a decades-long history of success in Olympia. The credit goes to our members and supporters who help give a bicyclists and potential bike riders a voice when laws are written.

Use this link to learn more about our priorities.

This article was posted in Advocacy, Funding/Policy, Issues & Advocacy. Bookmark the permalink. Follow comments with the RSS feed for this post. Both comments and trackbacks are closed.