We Did It! A Federal Safety Performance Measure for Biking & Walking to be Developed

Despite the drama surrounding the FY 2015 Omnibus, or “CRomnibus,” biking and walking just got a big win thanks to Washington state’s own Senator Patty Murray. 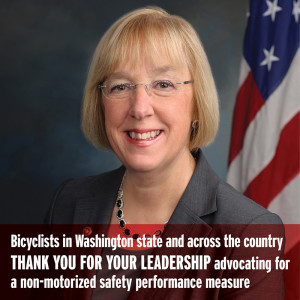 Tell Senator Murray thanks for her leadership in advocating for a non-motorized safety performance measure.

During the development of the 2015 budget, Washington Bikes and the League of American Bicyclists worked with Senator Murray’s office to include a directive for the US Department of Transportation (USDOT) to develop a safety performance measure. This push for inclusion in the appropriations bill represents a continuation of an earlier push to pass legislation in both the US House of Representatives and Senate to require USDOT to establish a non-motorized performance measure.

What can we expect from this important advance for non-motorized safety? For one, this directive will require states to set a goal of reducing biking and walking fatalities in their state, and report back on their progress.

Additionally, the directive speaks directly to the federal Highway Safety Improvement Program (HSIP). While some HSIP projects in Washington state have included walking and biking improvements, they have also included other traditional street design considerations that make it challenging to comfortably walk and bike. Furthermore, HSIP in Washington state hasn’t had an explicit tie to walking and biking as its primary purpose is to address top-tier priority safety areas in the state’s Strategic Highway Safety Plan, Target Zero, and not overtly on walking and biking. This new directive’s rulemaking and reporting requirements will precipitate more accountability as to determine whether HSIP investments actually improve safety for those that walk and bike.

In the current Congress Senator Murray holds a leadership position in the Senate on transportation funding issues and advocated for the inclusion of this directive to make our streets safer for everyone. We at Washington Bikes can’t thank her enough for her leadership.

Please join Washington Bikes and thank Senator Murray for her invaluable help in making this significant change happen for everyone that bikes and walks. Thank her today.

This article was posted in Advocacy, Alert, Federal, Funding/Policy, Issues & Advocacy, News, Politics, Safety, Transportation. Bookmark the permalink. Follow comments with the RSS feed for this post. Both comments and trackbacks are closed.