A Kirkland Mom’s Story: Why We MUST Invest in Safer Streets for Stella

Caron LeMay is a mom who volunteers with the Kirkland Greenways. In May she testified before the House Transportation Committee in support of the Liias Amendment to a proposed transportation revenue package; her story highlighted the importance of increasing investments in biking and walking infrastructure and street improvements that make our streets safer. Stella is Caron’s daughter, who was 6 and enjoying her first month of first grade at the time this story took place.

The Washington state legislature is in its second special session, still negotiating a potential transportation revenue package and the level of funding for biking and walking. The Senate could reach a decision sometime Friday, June 28.

Some legislators have proposed reduced funding–others have gone so far as to propose zero funding for biking and walking. Caron’s story makes it vividly clear that we cannot accept a transportation revenue package that takes us back instead of forward. We need safer streets for Stella. 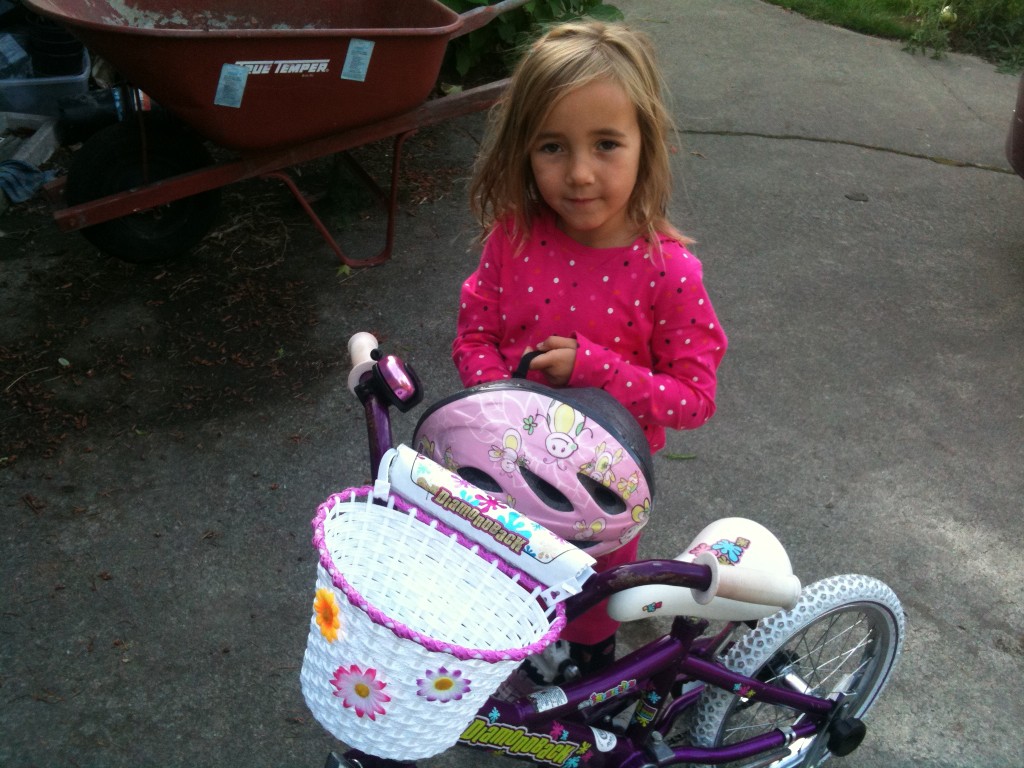 Stella with her bike and basket.

Stella and I were stopped in front of the high school, on our bikes (my bike plus the tag-a-long) on a red, waiting for the light to change in front of a city garbage truck that was well back from the end of Stella’s trail-a-bike. That same truck driver had waved at us while waiting at a stop sign moments before. There was no one in the left turn lane on our side of the intersection. It wasn’t raining anymore. Visibility was excellent.

I saw the man crossing the intersection toward us. Suddenly he was turning his head and lifting his left hand, twisting his body . . . the car was being driven by a woman turning left–too fast. We saw him get hit. Heard it. Felt it.

He was struck; his body was flipped onto the car, his face hitting the windshield and breaking it. Then he hit the pavement and remained there, lying on his back.  Stella was screaming and screaming. I yelled for her to get off of her bike and stand on the sidewalk. Behind me, three people were holding their cellphones, so I left mine in my pannier. Stella did what I asked her to, backing up and away from me, still screaming, so I dropped my kickstand and ran to where he lay on the road.

I knelt down by him on his right side, near his head. Someone from a car behind the truck was now on with 9-1-1. When I bent down to him I finally registered that his face was covered in blood. He raised his left arm up and back, towards his head, but didn’t say anything. His eyes were unfocused. I babbled something to him–that “he would be okay.”

I didn’t know what to do–my heart was pounding in my chest–I was filled with anger–I got up and I shouted that someone should take down the driver’s plate number in case “this woman” decided to leave now. The city worker from the truck chided me, saying, “Hey, hey!’” I realized that I was in shock. At this point there were already three men out of their cars helping, and I could hear a distant siren.

I went back to Stella. She was still screaming. My ears were finally starting to work properly and I realized she was screaming “Mommy!” over and over again, tears streaming down her face. I also realized that I had blood on my right hand from where I had touched him; I used my water bottle from my bike to rinse the man’s blood off.

Seeing blood on my hand was too much for her–she was terrified. I hugged her and asked if she wanted to stay and wait for the ambulance to “come fix the man.” She screamed, “No! No I want to leave this place!”

No one had moved their cars from the intersection; everyone was stopped. I lifted my kickstand and pushed the bike into the intersection, taking Stella’s hand. The light was at the end of a green now. We crossed, then walked the first bit of the way on the sidewalk. When we finally got to the pedestrian overpass we were back on our bikes again. At the other side of the overpass I stopped us again and called 9-1-1 to give my name and number as a witness for the collision. Stella wanted to know why I was calling, so I explained.

We got back on our bikes again. Going down the first hill on that side of the overpass, Stella said, “I never want to see something like that EVER again!” I don’t know why I said it, but I told her not to be an ambulance worker “because they fix up hurt people all of the time; it’s their job.”  She was quiet now, not crying.

I asked Stella to ring her bell a LOT on the quiet neighborhood streets–I didn’t want anyone to surprise us today. Getting the rest of the way to school meant going through a narrow, wooded, dirt trail past three little dogs on leashes that barked “hello” at us. I called “good morning” to them.  I was trying to be normal and cheerful–trying to narrate our ride for her and keep her with me. I was shaking so badly that I didn’t know how she was managing to stay on the bike.

When we emerged from the housing development on the other side, Stella did NOT want to cross 70th, which is very busy, but has a crosswalk. I held her hand tight and we crossed when everyone had stopped.

At school her friends gathered around her as usual, full of chatter and stories, but she was in shock and couldn’t get her words out, couldn’t break through the chatter to tell them her story…. I gently asked them all to wait for her because she had something important to tell them, but we had to talk to Veronique for a minute first. Stella’s teacher, Veronique, is amazing. She listened to us, then spoke to Stella and me comfortingly. I hugged Stella and assured her I wouldn’t leave yet; I promised I would wave to her when she was on her way to PE later today. She said “okay” and went out to her friends.

One thing I didn’t know about Veronique is that she witnessed a bad pedestrian collision long ago when she was 8 years old. She told me that she never forgot it, and couldn’t stop thinking about it for a long time afterward. When the school bell was rung by a student, everyone piled in and I walked down the steps to some other moms who were talking. I told them about it; fellow mom and good friend Laura Fisher offered me a ride home, but I wanted to wait for Stella, so I went back into the school.

In the kitchen, Rosie, our administrative assistant approached me, talked to me. She’s so kind. She offered me a ride home, but I thanked her; “No, I want to wait for Stella to go to PE. I promised.”  I sat down in the kitchen and sketched the intersection out, started writing about it. Someone else came to me and spoke to me about it. I waved to Stella when she went to PE, as I had promised. Then Laura showed up at school again and offered me a ride a second time. This time I took it. We loaded my bike and trailer-bike into her van and she took me home to my husband Glen, who was now aware that something bad had happened and was waiting for me. 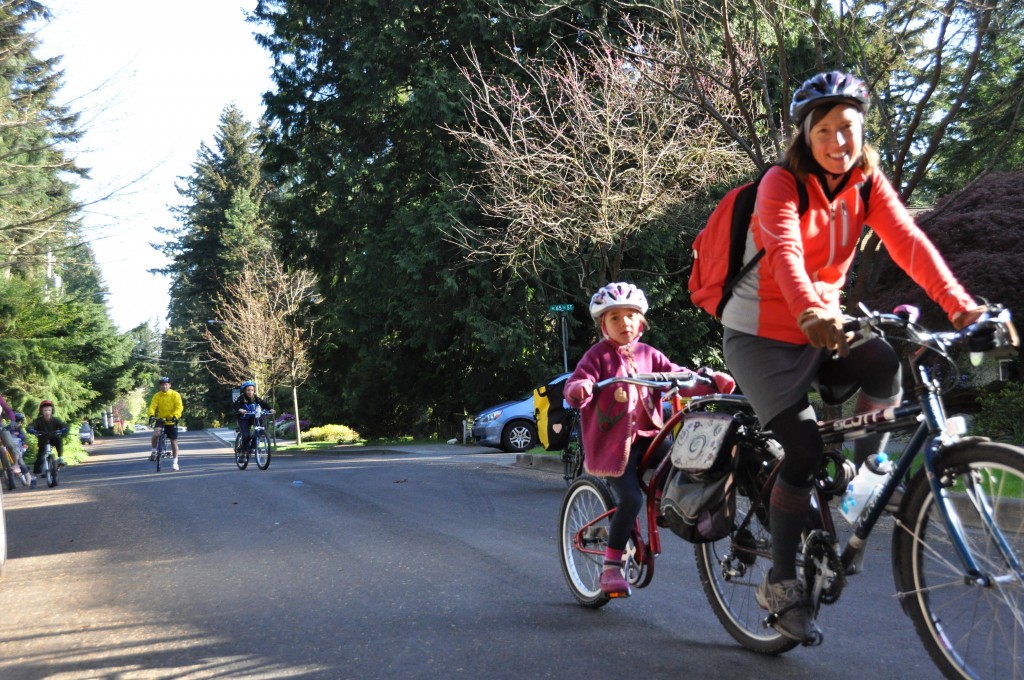 Kirkland mom Caron LeMay with 6-year-old Stella on back, enjoying a quiet neighborhood bike ride on the way to school.

That same day was the only time Stella told anyone what happened, and she only told her brother and her closest friends. A good friend had interrupted during that single telling: “Did he get hurt?!” and she had responded, “Well, duh! His face hit the windshield and there was blood all over!”

For over a week I kept imagining the man’s blood on me, looking at my right hand over and over again and seeing a shadow of blood somehow.

I was angry with myself for weeks–I still am when I think about it–blaming myself for what our poor baby saw and wishing I had taken her on a different route that day.

For a long time Stella and I would both silently replay what we saw. Neither of us could close our eyes without seeing and hearing “it.”  That’s what she would say, “Mommy, I can’t stop thinking about ‘IT’.” She didn’t ever talk about it except at the child psychologist’s office, and only because she was asked about it there.  We had been told not to bring it up with her or ask her anything when she wasn’t at that office, so that she could feel safe and normal and could heal at her own pace.

After the first 2 weeks she would make a collision action with her two hands, deliberately bumping her stiff fingertips into each other and looking at me meaningfully, looking for a nod of understanding, but not wanting anything to be said out loud.

A month later, I would hear Stella mumbling or playing out things that were obviously based on what she’d seen, “there’s a lot of blood in your head, you know…” and later, “I hate cars.” She still says that, actually.  And she was losing her temper or crying frequently, and at odd times.

She actually never spoke to her dad about anything she saw. I think Glen almost hoped she would though, so he could comfort her. But I think it was important for her to know that he was a safe place to be. She did silently show him the book she had made at the psychologist’s about “what happened after.” But even with that book she didn’t speak a word about it to him.

We still ride. In fact, we were advised by her child psychologist that we should NOT stop riding with her after that terrible day. And she didn’t want to stop.  She likes riding to school with her friends, and she feels good arriving by bike and always rings her bell when we get close enough for her friends at school to hear. Biking is still her favorite way to get around.

In order to help her feel safe for the first few weeks after the collision we helped her decide where her starting point was (unsurprisingly, she wanted to start near the pedestrian overpass, which avoided all crossings of neighborhood collectors and arterials). Gradually, she was able to move her ride starting point nearer and nearer to our home (and the street where we saw the man get hit).  But we haven’t ridden through that particular intersection with her since then, even though it links a number of schools.

Since the beginning of National Bike Month in May we have ridden every Wednesday and Friday with her, leading the bike train. We rode less regularly through the winter, but we even managed a ride on the first day back in January 2013. It was chilly!

She’s actually been able to ride on her own two wheels since last spring when she rode at the Redmond Velodrome, in the Kiddie Kilo. However, because the route to school is 2.5 miles with a long, steep hill (around 350 foot elevation) she has still been riding on the trail-a-bike. She hopes that after the summer she’ll be able to tackle bigger hills and confidently use her hand brakes going down the big one on 60th.

Many thanks to Caron for being willing to share her story.

This article was posted in News, Safe Routes to School, Safety and tagged Kirkland. Bookmark the permalink. Follow comments with the RSS feed for this post. Both comments and trackbacks are closed.